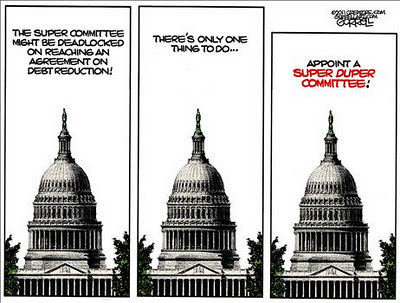 By the weekend, news reports indicated that the congressional Super Committee was closing in on an agreement. The deficit-cutting panel is mandated to trim at least $1.2 trillion in federal spending over the next ten years and, failing an agreement, automatic cuts would begin in 2013, after the national elections.

In days, however, it was clear that there was no agreement and the Super Committee, as Congress has always done, was looking at a variety of gimmicks and magical thinking to avoid having to address what is now a $15 trillion national debt, more than an entire year’s Gross Domestic Product.

The Super Committee was and is a bad idea on many levels if for no other reason than the Constitution requires that all bills involving expenditures must originate in the House of Representatives (Article 1, Section 7), but “the Senate may propose or concur with amendments as on other bills.” The Constitution, however, has mattered less and less to U.S. Congresses for a very long time.

On November 8, ABC News reported that Senate Majority Leader Mitch McConnell (R-KY) “suggested that the White House is pulling for the Joint Select Committee on Deficit Reduction…to fail because success would step on their storyline of Republican obstructionism.” Because Washington is a house of mirrors, the news of the past week has been of Democratic obstructionism.

By the end of the week, the President said that he would not sign any bill that repeals the automatic spending reductions that would occur if the Committee does not come to an agreement. “That veto threat,” said a Wall Street Journal article “was a response to GOP lawmakers’ proposals to shield the Pentagon from such cuts.”

On Veteran’s Day, November 11th, a Wall Street Journal editorial, “If Iran Gets the Bomb", took note of the International Atomic Energy Agency report that Iran was closing in on having its own nuclear weapons, saying that “The serious choice now before the Administration is between military strikes and more of the same. As the IAEA report makes painfully clear, more of the same means a nuclear Iran, possibly within a year.”

So, while Iran closes in on becoming a nuclear power, national election campaigns will be raging in 2012 with Obama’s only hope of reelection being to claim that the Republican Party is blocking his efforts to tame unemployment, revive the economy, and keep America safe. Meanwhile, Democrat members of the committee keep pushing for new taxes in the midst of a “recession” that rivals the Great Depression.

If it wasn’t so absurd, it would be laughable, but it is also the worst possible time to have automatic budget cuts that would take as much as $500 billion out of the Pentagon’s budget over the next decade if the Super Committee cannot find agreement. Reportedly, Defense Secretary Leon Panetta was looking for potential savings in the budget by cutting the Pentagon’s nuclear arsenal!

The state of our military equipment is geriatric and it is dwindling. The F-15 fighter jets that make up half the fleet, have an average age of 25 years! Air force strategic bombers average 34 years of age and refueling aircraft are 47 years old. The Navy has fewer ships today than on 9/11; 284 now compared to 316 in 2001.

Equipment and vehicles in use since the 2001 invasion of Afghanistan and the 2003 invasion of Iraq are in need of replacement. If the automatic cuts kick in, the Pentagon budget will be cut by $500 billion over the next ten years, precisely at the time the military will need the means to fight a war that would presumably start in the Middle East if Iran’s threats mean anything.

Cutting the Pentagon budget at this time and into the near future is the worst idea to come out of Congress when a kindergartner could find ways to cut $1.5 trillion from the U.S. budget.

Iran’s leaders, from the day in 1979 they seized American diplomats and held them hostage for 444 days, have been in a state of war against America. An Iranian truck bomb was used against the U.S. Embassy in Lebanon and against Marine barracks in 1983. Iranian-made IEDs killed many U.S. military personnel in Iraq. Within recent weeks we learned of a thwarted Iranian plan to assassinate Saudi Arabia’s ambassador in a Washington, D.C. restaurant.

Iran’s Supreme Leader, Ali Khamenei has called for the destruction of Israel, the “little Satan” and America, the “big Satan.”

Ignoring such threats is suicidal.

Israel destroyed Saddam Hussein’s nuclear reactor with a preemptive strike in 1981 and did the same to Syria’s secret nuclear program in 2007. It is unimaginable how events would have played out if Iraq had acquired nuclear weapons. The notion that the United States of America must depend on Israel to end the Iranian threat is cowardly and shameful.

Cutting the Pentagon’s budget now or over the next decade would be suicidal.

© Alan Caruba, 2011
**************************
Alan Caruba's commentaries are posted daily at "Warning Signs" his popular blog and thereafter on dozens of other websites and blogs. If you love to read, visit his monthly report on new books at Bookviews. To visit his Facebook page, click here For information on his professional skills, Caruba.com is the place to visit.
Posted by Longstreet at 11/19/2011 03:08:00 AM