Back in the early days of America only property owners were eligible to vote. It was a way of insuring that only those folks with a vested interest in the country had any real say in how the country was run. The founders of the country knew that Americans with an investment in America would take their time, consider the issues, and very carefully consider the candidates and their qualifications before casting a ballot. That is totally unlike today when one, basically, only has to have a heartbeat, and be registered, in order to fulfill the qualifications to vote. I mean there is something wrong with a system that allows folks who are certified “mentally challenged” to the point they cannot tell you the current day of the week to show up at the polling places and cast ballots. But it happens every election day.

I have said it before and I’ll say it again…Obama’s election was a brilliant victory for ignorance in America. A people, clearly thinking would not have voted for the gentleman. I might add… they did not.

“Hope” and “Change” sums up everything about the foundation of the liberal political philosophy we conservatives have warned our fellow Americans about for decades. It is based upon pure emotion.

Emotion is that thing which drives the human animal to do things he ordinarily would not do if he were thinking clearly. It is based on “feelings.” Remember the motto of the ’60’s generation: “If it feels good… do it!” And THAT is exactly what I mean.

To a lot of Americans it just felt GOOD to vote for America’s first black President, now didn’t it? Making a statement that racism in America is dead felt GOOD, didn’t it? No matter that both were (and ARE) wrong… it felt GOOD! That “GOOD” feeling sprang from the besotted voter’s emotions.

The fact that Mr. Obama is only half black and racism still abounds in America, as it does the world over, was never considered because nothing about those two statements stirs the emotions.

This emotion-based political philosophy of the left is the very quality that makes them so dangerous to freedom and liberty. 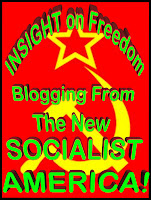 For instance, the Obama Administration, along with the liberal/socialist controlling the Congress, intend to reduce the size of our military even more than it was under the Clinton Administration. They also want to reduce our atomic arsenal and they hope they can accomplish their goal of a nuclear free world in the foreseeable future.

Now, when you step back and look objectively at just those two liberal/socialist goals you can see that neither make any sense. If anything, we need to enlarge the military and increase their budget. We are at war and we will be at war as far as the eye can see into the future. Our enemies could not care less about how Americans FEEL about the war, they intend to pursue their plans to beat the US down, conquer us, and establish a worldwide Islamic Caliphate ruled by Sharia Law.

Only a lunatic could actually think rogue states like North Korea and Iran will give up their nuclear arms just because the US sets an example by giving up ours! That’s the kind of thinking you’d expect to find on the playground of a kindergarten at recess! It doesn’t even belong in an adult conversation. But… our new President, and his comrades, seems to think it is the right thing to do.

Our economy is in the tank because the Congress “felt good” ordering America’s financial community to make home loans to those folks they KNEW had no way of paying the money back. But, hey! It felt GOOD! Again, it was pure, rank, emotion. Now we are paying the price for an emotional act that just happens to be the very action that “keyed” the collapse of our economy.

Very soon now we will be told that Americans are going to have universal healthcare. In plain language… socialized medicine. If you think healthcare is expensive now, just wait ‘til it is free! Not to mention the degradation of healthcare treatment under such a system. Does socialized medicine in America seem like sensible thinking to you? Of course not! But, it makes the proponents of Universal Healthcare FEEL GOOD!

We Americans are living our worse nightmare. But millions of Americans have awakened to the real world since last November. Unfortunately, it is a few months too late.

To make matters even worse, those of us who would cry out in warning and make attempts to alert Americans to the socialist take over of our country with our verbal warnings, and commentaries, have been, or are being branded as “Domestic Terrorist Bloggers.” Why, even Homeland Security has warned police agencies all over America to keep an eye on us. It seems we are the Americans who present a danger to America! Yes, indeed… it is the world turned upside down… again!

I fear for my country. America has gone from a vibrant capitalist society to a dying socialist society almost overnight. We have become an impotent sleeping giant sprawled across the globe whiling away our days dreaming of a socialist utopia that does not exist and never has. If anything, we among al, people are the most to be pitied. How pathetic we have become. We have traded our shining city on a hill for a government low-rent housing project. The worst of it is… we did it of our own free will!

Yes, democracy can be a dangerous way to govern a country as the German people learned when allied bombs were raining down on their cities. They chose The Furher of their own free will and they paid a price no nation should ever have to pay.

For democracy to exist, to thrive, and to survive, it is incumbent, it is REQUIRED, that the electorate is intelligent, learned, and knowledgeable people. Because it is they who decide, by their votes, whether democracy, in a free country, lives or dies.

The overriding question today is… Can America even survive? The answer, realistically, is… NO, she cannot… not if she continues the course she chose in 2008. Having said that, we must also say that YES, America can survive… IF she changes course and returns to her roots as a capitalist, democratic representative republic.

There is likely to be a historic internal struggle in America over the next few years to decide the issue of whether America lives or dies. It will be ugly as such struggles always are. The first indication of which form of government Americans really want is likely to come in 2010 when American return to the polls. If socialist candidates are thrown out and defeated, there is REAL HOPE. If not, rest assured the struggle will go on for many decades into the future. America will be a troubled land for our grandchildren and great-grandchildren.

Old America is gone. This New America cannot hold a candle to the greatness of the old America.

All this "talk" about Democrats being socialist is just crazy... Socialists would not take money from people and give it to corporations... A true socialist would (and this is my plan to fix the banks) seize the banks, spin off the parts that are failing and let them go fail, take the working parts, put them under control of the Fed. and their profits would go into the nation's cauffers for such things as Defense, Healthcare, and infrastructure spending thus getting us out of the recession. Then after the people would see how well that worked and it didn't cost them a dime I would then use the Department of Energy to seize the oil, natural gas and electricity companies, with the peofits from those I would be able to pretty near eliminate the personal income tax. That sir is what a socialist would do, Obama and the Dems are backed by big corporation, just different ones than the ones that back republicans. Republicans are just too far to the right, and the Dems are a shade more towards the center, and the average American is too stupid to see it. I once heard someone say that our parties are 2 wings on the same bird, flying to the same place. Where was the outrage when the national debt skyrocketed under Regan and Bush I, Clinton was the first and only president since Reagan to have a balanced budget and to cut the deficit, and the last Bush spent money for no good cause. Atlest if this guys plan works, and atleast the Dems. have a plan, and it is showing signs it is working, it will avoid a worse economy.

Re: Frank's comment, see the statement in red immediately above it.