Another Danger of an Obama Second Term 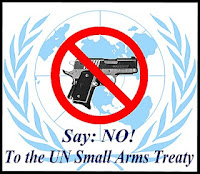 Another Danger of an Obama Second Term
Will The US Senate Ratify the UN Small Arms Treaty?
A Commentary by J. D. Longstreet

I originally wrote about this threat in December of 2012.  But with Secretary of State Hillary Clinton having publicly stated that the Obama Administration will be working hand-in-glove with the UN to pass a new "Small Arms Treaty,"  American gun owners need to keep in mind that with the constraints of another election no longer facing Obama (should he win in November) the Obama Administration can press ahead at -- flank speed -- to ram this treaty through the US Senate.  If passed it will, for all intents and purposes, disarm American citizens ... superseding the 2nd Amendment to the US Constitution.

We haven’t heard much about gun control lately, here in America, and I am beginning to believe that is by design. The Obama Administration does not want to awaken American gun owners -- at least until AFTER THE ELECTION!

The fact of the matter is this: The UN Small Arms Treaty amounts to global gun control.

It may surprise Americans to learn that our government is filled with lawmakers who endorse a one world government with the UN as the single governing agency for the globe.  They will most certainly support the UN's Small Arms Treaty when it comes before the US Senate

As we noted above, Secretary of State Hillary Clinton has announced the Obama Administration would be working hand in glove with the U.N. to pass the “Small Arms Treaty."

It is expected that the Washington Gun-Grabbers will package the treaty as legislation to assist in the fight against “terrorism,” “insurgency” and “international crime syndicates.” But the truth is this: The U.N.’s Small Arms Treaty is nothing more than a massive, GLOBAL gun control scheme.

American organizations supporting the Second Amendment have warned that the U.N.’s Small Arms Treaty would almost certainly FORCE national governments to:make gun licensing requirements far tougher than they are now, which would force law-abiding citizens to have to trudge through even more bureaucratic red tape just to legally own a gun;

It would also give the UN the power to CONFISCATE and DESTROY ALL “unauthorized” civilian firearms.  Of course, all firearms owned by the government will be excluded.


The treaty would BAN the trade, sale, and private ownership of ALL semi-automatic weapons.

There will be an INTERNATIONAL gun registry created.  Once they know who has the guns -- and where the guns are -- we can expect full-scale gun CONFISCATION.

The citizen “unrest” in America today over the teetering economy and the socialist agenda by those in power in Washington, may make the ratification by the US Senate of this “treaty” seem far more palatable and even desirous by our current government.  And that is why we bring this warning to you. We must keep a wary eye on the goings-on in the national legislature.

In 2009, we issued a warning concerning the unceasing work of “gun-grabbers” in America. In that article we said the following: “So America edges ever closer to losing the citizen’s right to keep and bear arms, quite possibly even the right to carry a knife. There can be no doubt that a knife, in the time of our forefathers, was, indeed, a weapon. It would, no doubt, fall into the category of “arms.” There can also be no doubt as to why the forefathers felt it important to place this amendment (the second amendment) in the constitution as a part of the original 10 amendments that made up the Bill of Rights. They had just fought a war against a tyrant to gain their freedom - and they did it with a citizen’s army composed of men who owned their own weapons!

George Washington, the Commander in Chief of the Continental Army and the first President of the United States said the following: "A free people ought not only to be armed and disciplined, but they should have sufficient arms and ammunition to maintain a status of independence from any who might attempt to abuse them, which would include their own government."

Thomas Jefferson said the following: "When the people fear their government, there is tyranny; when the government fears the people, there is liberty."
And finally, words from the most well known of the tyrants of the last century, Adolf Hitler: “The most foolish mistake we could possibly make would be to allow the subject races to possess arms. History shows that all conquerors who have allowed the subject races to carry arms have prepared their own downfall by so doing. Indeed, I would go so far as to say that the supply of arms to the underdogs is a sine qua non for the overthrow of any sovereignty.”

It is good, I think, to note that The Forefathers felt so highly of the right to keep and bear arms that it is the SECOND Amendment. The first being, of course, freedom of speech, religion, etc.  Please note that without the Second Amendment the First Amendment would effectively be null and void.

We must tread softly, yet boldly, as we attempt to protect our rights these days. America has two generations of citizens trained in socialism as products of the Public (Government) School System. Like “Pavlov’s Dog” they await only the ringing of the bell to respond in defense of the “greater good.” But, like the other dog, chasing it’s tail, they haven’t the reasoning ability to ask of themselves what they intend to do with the tail if, and when, they DO catch it?”

“The price of freedom is, indeed, eternal vigilance.” The Democratic Party has demonstrated their utter contempt for the concerns and wishes of the American citizen. Currently they continue to hold the reins of power in the US Senate and will, most likely, continue to do so after the November election.  We cannot drop our guard, or divert our attention for one moment. If there is a way, anyway, (as we have learned the hard way) the democrats will try to sneak ratification of the UN Small Arms Treaty through the Senate with no regard for the opposition of American gun owners nor for those who insist the US Constitution still reigns supreme in America -- NOT THE UN.

If the Obama Regime is returned to power in November -- along with the liberal-socialists politicians that are, unfortunately, the Democratic Party these days -- the constitutional rights of all Americans are in peril.

Conservatives must work harder than ever as we continue our endeavor to rid our nation’s leadership of those who support the United Nations and their goal of establishing a one world government, or global governance, under THE UN's control.

We must not allow the UN Small Arms Treaty to be ratified by the US Senate… period!

At this point I am seriously starting to believe that the POTUS doesn't matter, we MUST retain the House and take the Senate... Otherwise, the SCOTUS is a goner, and THAT is a disaster...