A friend asked me the other day what I thought President Ronald Reagan would think of Obama. It only took a moment to answer. "He'd laugh!", I said. Then I added: "A real side-splitter!" It was an honest answer and one I believe is true.

I think Ronald Reagan, if he were to suddenly re-appear upon this earth for a brief visit and be told that Obama was President, would, indeed, break up in near uncontrollable laughter. Reagan would think someone was playing a practical joke on him. He would just KNOW Americans had better sense!

I can hear Ronnie saying, "Why, he's just a, uh, child! A grown man, yes. But, still a naive child. A narcissistic child, at that!" Then, he'd laugh again, enjoying the joke, still unconvinced that Americans could do that to themselves and to their country.


After Reagan watched a few videos of Obama's speeches, the smile would slowly drain from Reagan's face as he scanned the adoring, worshipful, faces of the crowd while some fainted in their passion for the boy/man "messiah" and I can hear the crestfallen President say in a voice grown husky in bitter remembrance: "I've seen those faces before.... in Berlin in the 1930's." Then, Ronald Reagan would weep.


One of my "E-mail Buddies" sent me the piece below a few days ago. I have no idea who put it together, but I'd like to thank them. As America continues her decline and collapse, under the heavy hand of socialism, Americans are going to need memories of the America we used to know to hold on to, to sustain us, until we can rescue our beloved America from the clutches of the power-hungry, left-wing elite currently strangling the life out of her.


As you read the "Reagan Gems" below and remember the America of greatness, the America that once led the world, challenge yourself to do all in your power to keep those memories alive. And prepare. As Thomas Jefferson said: " Resistance to tyrants is obedience to God."


You know, democracy is, quite likely, the greatest gamble a nation can take. For there is no guarantee "The People" will not vote in a tyrant as their leader. When that happens, as it sometimes does, then it is up to the same people to prepare for the tyrants reign and the tyrant's removal.


Thomas Jefferson once said: "Experience hath shewn, that even under the best forms of government those entrusted with power have, in time, and by slow operations, perverted it into tyranny." I ask you to look objectively at our government today and ask yourself if you are truly comfortable with that much power in the hands of THOSE people. If you find you are comfortable, then, dear reader, you need to wake up and begin paying attention!


Now we have the yoke of socialism chained across our shoulders and around our necks. We Americans, yes, WE placed it there. Soon we will be completely dependent upon the government for our very existence. To my fellow Americans I say, that is NOT living FREE! That is SLAVERY! 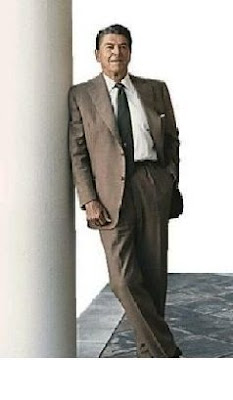 'Here's my strategy on the Cold War: We win, they lose.'- Ronald Reagan

'The most terrifying words in the English language are: I'm from the government and I'm here to help.' - Ronald Reagan

'The trouble with our liberal friends is not that they're ignorant; it's just that they know so much that isn't so'- Ronald Reagan


'Of the four wars in my lifetime, none came about because the U.S. was too strong.' - Ronald Reagan

'I have wondered at times about what the Ten Commandments would have looked like if Moses had run them through the U.S. Congress.'- Ronald Reagan

'The taxpayer: That's someone who works for the federal government but doesn't have to take the civil service examination.'

'Government is like a baby: An alimentary canal with a big appetite at one end and no sense of responsibility at the other.'- Ronald Reagan

'The nearest thing to eternal life we will ever see on this earth is a government program.'- Ronald Reagan


'It has been said that politics is the second oldest profession. I have learned that it bears a striking resemblance to the first.'- Ronald Reagan

'Government's view of the economy could be summed up in a few short phrases: If it moves, tax it. If it keeps moving, regulate it. And if it stops moving, subsidize it.'

'Politics is not a bad profession. If you succeed, there are many rewards; if you disgrace yourself, you can always write a book.'- Ronald Reagan

'No arsenal, or no weapon in the arsenals of the world, is as formidable as the will and moral courage of free men and women.'- Ronald Reagan


'If we ever forget that we're one nation under God, then we will be a nation gone under.'- Ronald Reagan 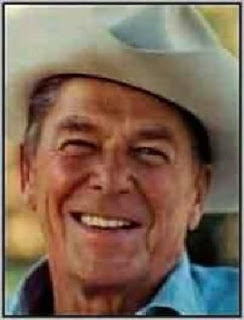 Reagan, huh he was a joke, didn't he raise taxes 3 times to try to save the economy? It was funny infact when Newt Gingrich called the Majority leader Bob Dole the "Tax collector for the welfare state" because Mr. Dole was pushing through Reagan's tax hikes. Reagan was a double speaking moron. "The War on drugs" that has completely failed, Nancy "nanny" Reagan and her deplorable "just say no" crap that never worked was right up there with Tipper Gores war on Rock N Roll. When are the people going to wake up and realize all our leaders, from 72 through 2008 were cut from the same cloth, maybe this guy isn't but the powers that be will lead him in the same direction in the end I am afraid.
We all know what McCripple would have done and I just feel better knowing that that Blow hard or McPalin will never see the presidency.