The headline of the lead, page one article in The Wall Street Journal on Friday, November 8 was “U.S., Iran Close In on Nuclear Deal” with a sub-headline “West Set to Ease Some Financial Sanctions in Exchange for Tehran Freezing Most Advance Work.’ Secretary of State John Kerry cut short a visit to Middle East states, including Israel, returning to Geneva where the deal was reportedly close to being signed.

We now know that Obama began to ease financial sanctions before the latest negotiations began. He did so secretly.


Shades of “Munich” and the infamous 1938 deal with the Nazi regime that a British Prime Minister promised would bring “peace in our time.” That level of naiveté resulted in World War Two which began a year later when Germany invaded Poland after negotiating a non-aggression pact with the Soviet Union that was itself later invaded. 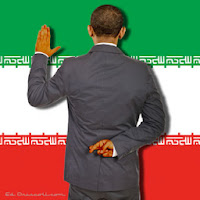 It’s not as if Americans and the rest of the world don’t already know that Barack Obama’s word is as worthless as his Iranian counterparts or that Iran does not already have a long record of aggressive behavior. They just celebrated the 34th anniversary of their hostage-taking of U.S. diplomats in 1979, complete with crowds in Tehran shouting “Death to America.”  Not even the Geneva negotiations were reason enough to throttle back on the public display of their hatred of the U.S.


For reasons known only to Obama, he has wanted to conclude a deal—any kind of deal—with the Iranians since taking office and by “Iranians” I mean the two centers of power, Ayatollah Ali Khamenei, the Supreme Leaders, and the Islamic Revolutionary Guard Corps (IRGC). The latter is utterly opposed to any slowdown in the pursuit of nuclear weapons.

Suffice to say, there have been many who have counseled against dealing with either one, not the least of which is, of course, Israel, followed closely by Saudi Arabia, two longtime allies of the U.S. who are being betrayed. And know it.


In 2009 when protesters filled the streets of Tehran to resist the totalitarian regime, President Obama choose to remain on the sidelines, saying he saw no point in “meddling” in the Iran’s affairs while the protesters shouted, “Obama, are you with us or against us?”


One expert on Iran, Ali Alfoneh, advises that the most dangerous approaches to take with IRGC commanders are “compromise and silence.” He cited the 2007 seizure and detention of British soldiers off the Iran-Iraq coast, to which I would add the seizure of three American hikers in 2009 who were held for two years. Then there was the 2011 attempted assassination of the Saudi ambassador in Washington, D.C., all of which were largely met with silence from the West.


Currently, Saeed Abedini, an Iranian-born U.S. citizen has been imprisoned in Iran since his arrest in June 2012 during a visit. He is a convert to Christianity and, in Iran, a Muslim who converts to another faith can face the death penalty.


Joining the U.S. in the current negotiations are foreign ministers from Britain, France, and Germany. Writing in the November 7 National Review Online, Benjamin Weinthal, a fellow of the Foundation for Defense of Democracies, noted that “From the beginning of Iran’s nuclear talks with the U.S. and Europe, the country has managed to win delays and move their weapons program closer to the point of breakout. A deal that does not fully remove Iran’s capability, including its 18,000 centrifuges, to produce a nuclear weapon will endanger U.S. security.”


It poses an even greater threat to Israel as well as Saudi Arabia and the entire Middle East region, none of whom want to deal with a nuclear Iran. The current negotiations and any deal that results from them would signal, says Weinthal, “the withering away of our opposition to the regime due to fatigue.”


Fatigue may be a factor, but there was a time when the U.S. waged the Cold War with the then-Soviet Union from 1945 to its collapse in 1991. We could surely hold out against Iran if we had a President with the will and the wisdom to do so. We don’t.


Just as virtually every domestic and foreign effort and policy by the Obama administration has met with failure, I sense that the U.S.-Iran deal stems from Obama’s strong desire to withdraw from having to deal with any of the Middle East nations as if they were an irritant that he wants to ignore. A deal, however, would give Obama a "success" of any kind to divert attention from the Obamacare debacle.


The U.S. withdrawal from Iraq has been a disaster for that nation. The withdrawal from Afghanistan is scheduled to be complete in 2014. Obama’s “red line” with Syria disappeared with his empty threat to bomb that nation following its use of poison gas; only Russia’s intervention made possible the destruction of those weapons. Meanwhile, Iran continues to provide conventional weapons to Syria’s regime and to maintain two anti-Israel Palestinian groups, Hezbollah and Hamas.


A deal with Iran, filled with concessions to a nation desperate to get various international sanctions removed, may yet--as of this writing--fall through. The French are reportedly not enthusiastic and the Iranians are reportedly putting forth demands that are not likely to be met. It is sufficient to say that It would be impossible to confirm any compliance from the regime.


Writing in the Ottawa Citizen on November 5, Sheryl Saperia, the Director of Policy for Canada at the Foundation of Democracies, advised that “The first step to maintain and even strengthen sanctions against the regime. Tighter sanctions could slow down the rate at which Iran is acquiring breakout capability and provide more time for the West to construct a coherent plan. In the best-case scenario, increasing sanctions would cause enough economic pain to compel the Iranian regime to surrender its nuclear program outright.”


Last Thursday, speaking of the Geneva accords, Israel’s Prime Minister, Benjamin Netanyahu, said that “adopting them is a mistake of historic proportions.”


History is often a record of mistakes made in the face of aggression and evidence of duplicity. The Geneva accords with Iran would fulfill Netanyahu’s warning.


Alan Caruba's commentaries are posted daily at "Warning Signs" and shared on dozens of news and opinion websites. His blog recently passed more than 3 million page views. If you love to read, visit his monthly report on new books at Bookviews. For information on his professional skills, Caruba Editorial Services is the place to go! You can find Alan Caruba on both Facebook and Twitter as well.
Posted by Longstreet at 11/12/2013 12:07:00 AM