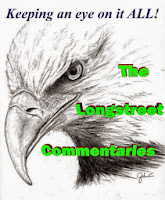 The Bastardization of America
A Commentary by J. D. Longstreet
**************
The dictionary defines bastard as:
“bas·tard
/ˈbæstərd/ noun
1.
a person born of unmarried parents; an illegitimate child.   (SOURCE)

In America today “73 percent of black children are born outside marriage, compared with 53 percent of Latinos and 29 percent of whites.” SOURCE:  http://www.utsandiego.com/news/2012/feb/18/tp-most-births-among-those-under-30-are-to-unwed/all/?print


What ever happened to shame?  An even better question to ask, perhaps, is what has happened to self-respect?

Today in America  “…. More than half of births for women under 30 occur outside marriage.” SOURCE:  http://www.newser.com/story/139982/most-babies-to-young-moms-born-out-of-wedlock.html

It would appear, from the current figures, that our friends of the liberal and progressive persuasion have done a heck of a job in their efforts to destroy the American family.  It has worked beyond their wildest expectations.

In the not too distant past having the misfortune to be born a bastard marked you for life.  Your expectations were not good, to say the least.

Mothers of bastard children were marked for life as well.  They were social outcasts.  The fathers were, well, just SOB’s lacking in self-control and having no respect for women, children, or the family.  He was not to be trusted, period.

America has truly become a “nation of bastards.”

You may ask why I am so concerned over this jaw-dropping illegitimacy rate.  The answer is simple.  People’s lives are being destroyed and the future of America is being destroyed right along with them.

THIS is what happens when the American family is destroyed.  Understand, two mommies, or two daddies -- with children -- is NOT a family.  A single parent with children is only half a family, at best. A family MUST be a father, mother, and the children.

Msgr. Charles Pope, of the Archdiocese of Washington, has said: “The breakdown of the traditional family is at the heart of what Daniel Patrick Moynihan once called a “tangle of pathologies.” The image I have often used is that the breakdown of the nuclear family is in fact a kind of nuclear fission. For the family (not the individual) is the basic unit of society. Splitting the family is like splitting the atom, it leads to a destructive chain reaction that, if not somehow controlled and contained, destroys just about everything in sight.

So many of our national ills are show(ing) a strong connection to the breakdown of the family: poverty (the highest correlation to poverty is single motherhood), juvenile crime, teenage suicide, promiscuity, teenage pregnancy, lower SAT and other academic scores, higher dropout rates, authority and trust issues, abortion (85% of abortions are performed on single women), a demonstrated lower capacity to make and keep commitments, delayed maturity, and a whole array of other things in a “tangle of pathologies.”

Clearly God, and nature provide that a child should have the influence of both a father and a mother, both a male and a female influence. It makes sense that proper human formation would require both male and female influence, which is both complimentary and diverse. There are important things that a child can learn from his father than he cannot learn from his mother and vice versa.” SOURCE :  http://catinfor.com/en/2012/02/22/out-of-wedlock-birth-rate-continues-to-soar-nothing-less-than-the-future-of-our-country-is-at-stake/

If you were taken aback when you read the title of this piece, then your shock is a clear indication of just how efficient the political correctness movement has been in America concerning issues such as illegitimacy.

Black American leaders have failed, in my opinion.  It seems to be evident they had rather rail against racism, slavery, and poverty than attack, head-on, the breath taking issue of black bastard childbirths.  Even, it would seem, when 73% of the children of America’s black community are born out of wedlock, it is still much easier to take the path of least resistance and preach “victimhood” to America’s black community than it is to preach “responsibility” for one’s self and one’s circumstances.

As MSGR. Charles Pope says:  “Hard though it is, accepting personal responsibility is essential to human dignity.” SOURCE:  http://blog.adw.org/2012/02/out-of-wedlock-birthrate-continues-to-soar-nothing-less-than-the-future-of-our-country-is-at-stake/

To learn why America is crumbling, it is necessary to inspect the foundation – the family.

When the foundation of any edifice begins to crumble it is only a matter of time before the entire structure collapses.