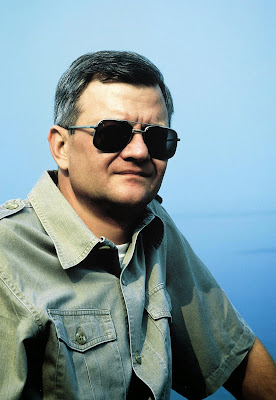 I feel as though I have lost a friend today.  I refer to the passing of author Tom Clancy.  Clancy died on October 1, 2013, in a Baltimore, Maryland, hospital. He was 66 years old.

I never met the man, though, I think I "sorta" did through his writings.   Clancy was a conservative and that makes him a brother.

I have spent many, many hours pouring over his books, savoring every single word.   He had a talent for painting what I call "word pictures."  His mastery of the English language was such that, using words alone, he could paint a picture on the canvas of your mind and you could view the scene he described as though it were real and in vivid color.

Many of his books were made into major movies, but none of the movies did the books justice.  Hollywood just could not produce -- on the silver screen -- what Clancy could produce in the minds of his readers.  Theirs was an impossible task.

Tom Clancy was a lifetime supporter of conservative and Republican causes in America. His books bear dedications to conservative political figures, most notably Ronald Reagan.


Oh, and Clancy was also a Life Member of the National Rifle Association since 1978.

Here are just a few of Clancy's awards and recognitions quickly gleaned from Wikipedia:

Clancy was one of only three authors to have sold two million copies on a first printing in the 1990s (the other two being John Grisham and J.K. Rowling). Clancy's 1989 novel Clear and Present Danger sold 1,625,544 hardcover copies, making it the #1 bestselling novel of the 1980s.[21]

Clancy received an honorary doctorate in humane letters and delivered the commencement address at Rensselaer Polytechnic Institute in 1992, and has since worked a reference to the school into many of his main works.[22]

Clancy was an honorary Yeoman Warder of The Tower of London holding the title "Supernumerary Yeoman".[23] On the television show Ace of Cakes his wife commissioned, for his 60th birthday, a special cake in the shape of the Tower of London in acknowledgment of his status. In the episode, Tom Clancy referred to the Beefeaters as, "Just a terrific bunch of guys".

Clancy received the Alfred Thayer Mahan Award for Literary Achievement from the Navy League of the United States in 1990.

The BBC Radio 4 sitcom Deep Trouble, set on a nuclear submarine, features a humorous version of Clancy as a recurring character. He is portrayed by Ben Willbond, co-writer of the series.[24]

The British sitcom My Family has often shown the character of Ben reading a Tom Clancy book, particularly in the Series 5 episode "The Book of Love", in which Clancy's novel The Bear and the Dragon is referenced frequently.

He was mentioned in American History X at a family dinner table were Edward Norton and Edward Furlong were present. The mother of these two remarked to the father that they do not teach Tom Clancy at college.

Tom Clancy appeared in the "Diatribe of a Mad Housewife" episode of The Simpsons, wearing a cap saying "USS Iowa (BB-61)" and was tricked into giving Marge a quote for her upcoming book."  SOURCE:  http://en.wikipedia.org/wiki/Tom_Clancy

To say that Clancy will be missed is so, SO, inadequate.   His passing will leave a hole in the pantheon of American writers that will not be filled soon, certainly not in my lifetime.  His regard for truth and detail made his writings leap from the page.  His prescience was often reflected on the front pages of newspapers.  To say that fact was uncomfortable for leaders of many countries around the globe would be an understatement.

Clancy once said the following:

"Nothing is as real as a dream. The world can change around you, but your dream will not. Responsibilities need not erase it. Duties need not obscure it. Because the dream is within you, no one can take it away."
– Tom Clancy

We can thank God for the talent that enabled Clancy to share his dreams with us.