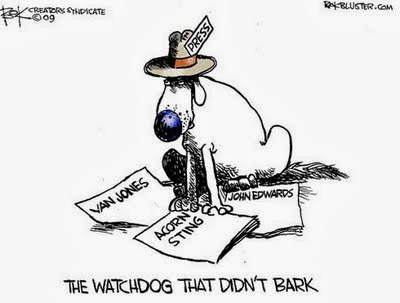 Obama’s promise to lead an open and transparent administration has become an “albatross” according to a Dec 24 Politico.com analysis by Josh Gerstein. As Obama’s fifth year in office wraps up, much of the Washington and nation’s press corps is very unhappy.


With the exception of those who depend on Fox, ABC radio, the Wall Street Journal, and other conservative outlets, too many of the consumers of news are blissfully unaware of the liberal, rubber stamp product they are receiving. It is the complete betrayal of those whom the press is supposed to serve.


They did not report the truth about Obamacare. They have not reported the truth about Obama’s failed foreign affairs policies, including the attack on Benghazi. They have largely ignored other scandals. Obama’s new economic “inequality” lies are right out of the Communist Manifesto. The result, however, was his reelection in 2012 and millions of cancelled health plans.


All administrations have sought to control the information—the message—that reaches the public, but the Obama administration has gone to greater lengths than previous ones. In particular, its public affairs offices (PAOs) have become obstacles to press access.


Writing in the Dec 17 edition of Editor & Publisher the newspaper trade magazine, Jim Dickinson said, “Over two hours at the National Press Club a few months ago, the truth finally hit me. Journalism has done it to itself, the ‘it’ being the surrender of our First Amendment-protected responsibility to tell the people what their government is really, actually doing—as opposed to what the government tells us it wants the people to know.”


The panel to which Dickerson was referring was entitled “Government Public Affairs Offices: More Hindrance Than Help?”  He wrote that “Public affairs offices increasingly require that reporters conduct all interviews through the press office. U.S. Departments and agencies often mandate that their employees only talk to reporters through official channels and with communications staff present.”


Not only do government employees know that this means their job can be on the line, but as I noted in October, the Whistleblower Protection Enhancement Act signed into law in November 2012 in reality puts whistleblowers at risk of going to jail.


Reporters find that the leaks from whistleblowers and routine information from government employees are drying up. Ironically, the actions of former NSA employee Edward Snowden and U.S. Army corporal Bradley Manning exposed more information than the administration wanted anyone to know. Manning went to jail and Snowden has found asylum in Russia. Both said they acted in the public interest; a public being told that the NSA’s acquisition of data on every phone call is being done to protect them.


The problem is manifest in efforts under the Freedom of Information Act to secure feedback from government agencies. Politico’s Gerstein pointed out the availability of government records under FOIA often results in requests routinely lingering for years “and often end up producing a ream of blacked-out text.”  News is expected to be timely and delaying access to public records negates that.


What has been and is reported these days are the lies for which the Obama administration has become famous.


The administration has called the scandals of the first term “phony” and a recent Sixty Minutes interview with Susan Rice, now the national security advisor to Obama, dismissed the Benghazi cover-up as “false.” It was Rice who went on five Sunday news shows to spread the lies about the attack—on the anniversary of 9/11—having  been caused by a video no one had ever seen. That earned her a promotion!


The daily White House press briefing has become increasingly heated and, when the President gave a press conference before leaving on a Christmas vacation, he was asked if 2013 had been the worst year to date for him. He obliquely acknowledged what everyone knows, but denied he pays any attention to polls, something every President of the modern era has always done.


The mainstream press has learned that, in return for having published the White House “party line” throughout its first term, that it would tap their phones and accuse a Fox News reporter of being an “accomplice” for releasing information it wanted to keep secret.


Its use of public information offices to thwart or control what news is released, its increased use of “official” White House photos, its widespread failure to respond to Freedom of Information requests, and its use of social media and organizations allied with the White House to advertise and spread its message all add up to a highly manipulative effort to influence the public.


The good news is that the Internet has become a major source of news and analysis available to everyone. As traditional print newspapers suffer decline due to the loss of advertising revenue and the younger generation’s preference for electronic access to the news, the scope of news has expanded to sources beyond government control.


A secretive and deceptive Obama administration is suffering from an abundance and availability of the TRUTH. Too bad that too many journalists have not been active contributors.