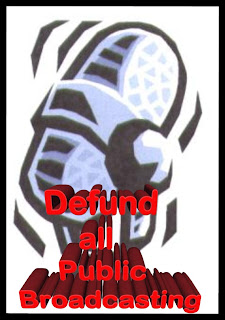 No matter the exact wording, it is a profound statement and one that has stuck with me, as you might expect, throughout my life.

Last week when NPR “canned” Juan Williams, it sprang forward into the consciousness area of my brain with the force of a mental electrical storm.

Allow me to declare, first of all, that I do not often, if ever, agree with Mr. Williams on his politics or his “social” positions. But the firing of Mr. Williams, for expressing his honest opinion, was, well, beyond the pale. It was simply incredible, meaning, – unbelievable.

If NPR has proved anything it is this -- if you work for them you had better toe the leftist line or you will be shown the door.

Public funding of a broadcasting organization today is unacceptable – period. In our opinion, all federal monies should be immediately cut off to NPR and even to CPB. If they cannot make it on donations from like-minded individuals then allow them to sink and disappear from the broadcasting scene.

As a taxpayer it galls me, no end, that my tax dollars are applied to assist in financing an organization that has the capacity to act as a cheerleader for politicians, for the government, or for any political agenda. It is just wrong on so many levels.

In my time of traveling the country for CPB, I encountered only two state programs that were genuinely politically balanced and I can count the number of conservative public broadcasting employees on one hand.” We urge you to read the entire article at the Washington Examiner. You will find it here (SOURCE).

Senator Jim DeMint (R), of my home state of South Carolina, wants to cut off all federal funding for NPR. According to news reports a spokesman for the senator’s office has confirmed the South Carolina Republican plans to introduce legislation to end federal funding for NPR.
Back in June, of this year, Colorado Republican U.S. Rep. Doug Lamborn introduced legislation in the House to cut funding for the Corporation of Public Broadcasting after fiscal year 2012. That bill is in committee as we write.
It is time for all government funded broadcasting to cease. There simply is no need for it. There are a multltude of channels on TV these days which fill the need for which government funded public broadcasting was intended. The need no longer exists – if it ever did.

Juan Williams, himself, called for defunding of NPR, last week, after being fired for expressing an opinion on Fox News Channel. Williams said: “If they want to compete in the marketplace, they should compete in the marketplace,” Williams made this statement in an interview on Fox News Channel’s “Fox and Friends”. Williams went on to say: “They don’t need public funds. I think that they should go out there. They think their product is so great, go out and sell the product.” Williams also said: “And too often, they make it out like, ‘you know what, we are a public jewel and we need the protection of the federal government, we need federal funds that come through the member stations and they pay for this product.’ Nonsense,” he said. (SOURCE) (This is one of the rare occassions we agree with Mr. Williams.)

What NPR did was against everything that folks like us believe in, BUT, I don't feel bad for Williams or anyone else that is a victim of the monster they helped to create, liberalism, and it's most fervent voice, NPR...

This was surely a case of 'reaping what one has sown'...

“This is the second time( I believe 6 months or so ago he was called an “uncle Tom) by another black on his show for daring to question the guy) I’ve seen the liberal yo-yos take off on Juan Williams when he has “overstepped” his bounds and spoken a truth that was against the “party line” (for want of a better way to put it).

I have said more than once in the past that a government run co-opted media is but one step towards the Soviet style dictatorship that we witnessed with the old USSR. This is beyond Big Brother. This is not only the squashing of Free Speech, but is in fact taking away one of our most sacred rights. And he wasn’t even on an NPR show!

This Political Correctness, which is nothing more than a Gestapo style propaganda issue has to stop!
I for one do not agree with most of Mr. Williams stands. however, he has never been afraid to call it as he sees it and in this case he was correct!
The man appears to be an honest (though misguided) person who unlike most of the folks on the left argues his point civilly and calmly. To be fired for relating the truth is beyond everything we hold sacred in this country.

Kudos to Mr. Williams for daring to stand up to the kind of censorship that is so warmly welcome by leftist Soviet and NAZI style governments!”