Renewed Effort Toward Global Governance At The UN?

“Outlining priorities for the 65th session at a news conference last week, Mr. Deiss (Thomas Deiss, the UN General Assembly President) called for efforts to “reinstate” the UN and its 192-member General Assembly to the centre of global governance.” (SOURCE)

The paragraph above is from an article titled: “Countries welcome new Assembly President’s focus on global governance,” which can be found HERE. The article is dated the 21st of September 2010. It also states: “Several countries have expressed support for the initiative of the General Assembly President to make global governance a central theme of the current session of the United Nations body. 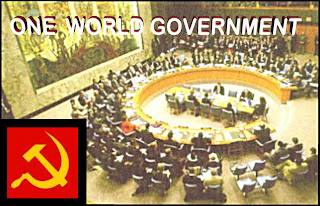 The article quotes Mr. Deiss as having said: “The challenges which we face today have acquired a global dimension and require global solutions. Our actions must have broad legitimacy and be the result of inclusive processes. We have to improve the mechanisms for information, consultation and cooperation between the United Nations and other actors and tools of global governance ... ."

It surely appears that warnings concerning the determination of the UN to formulate a one-world government were prescient, indeed.

It is fairly easy to understand why an organization, any organization, would want to rule the world … RAW, UNADULTERATED, POWER … but, it absolutely escapes me as to how they plan to actually GOVERN all the peoples of the earth for a single instant, let alone forever.

The expression “herding cats” comes immediately to mind when I think of the impossibility of a single ruling body governing the “earth people.”

But first we must ask ourselves how, exactly, will global governance be established? It will surely be through one of two avenues. Think about it. A one-world government must be achieved either by consent -- or by conquest.

It is inconceivable that the people of the United States would willingly give up their freedom and liberty, forsake their constitution and their bill of rights, and swear fealty to the United Nations, or any other would-be global ruling body … at least for a few more generations, anyway.

Americans, of a necessity, will have to be conditioned to accept less and less freedom, as the years go by, before there can be any thing approaching a reasonable expectation that they will accept what can only be described as “global slavery” overseen by a single globe encompassing authority.

Look, a one-world government would immediately bring us global poverty, and global war(s). That is the bottom line. Earth would overnight become a single battleground as the forces of that ruling authority attempt to impose its will on every single person on the planet. All wars would be “world wars” as they would affect every person on the globe.

The current American government is trying, as best it can, to condition Americans and drive them toward acceptance of global governance at some level, to some degree, with the goal of having America willingly submit itself to a single global authority. Unfortunately, the current American presidential administration is, for all intents and purposes, just a puppet government whose strings are being pulled by international financiers and moneymen.

Nobody has been able to convince me, yet, that the 2008 financial crash was not orchestrated to elect the Obama Administration in order to pave the way for the totalitarian one-world government those powerful world financiers covet.

Sounds like another conspiracy theory, doesn’t it? Well, as the television program says: “Not all conspiracies are theories.”

I am convinced the idea was to bring America to her knees to make her malleable to their wishes. For a global government to have any chance, at all, the puppeteers need America in the vanguard of the creators of that government. But most of all they need the American people to willingly submit to it.

But, they ran into a problem, a big problem. The problem they mistakenly thought they could avoid turned out to be -- the American people themselves!

The weak-spined American government will be shown the back of the American people’s hands in about four weeks at the polls.

Much of the world does not understand that here, in America, the government serves at the pleasure of the people. The power of the American government is granted by the “consent of the governed.” We, the governed, are about to rescind the privilege to wield that power for a great number of those in our government in about a month. Its what we do to a rogue government.

While the Obama Regime is busy back-slapping each other, and applauding each other, and reveling in the deepest depths of denial we have seen since “Baghdad Bob,” their world is about to crumble about them. And the global governance crowd? Well, their plans will be set back, at least for a while. But they will be back. Count on it. And we will confuse their plans again. “Sic Semper Tyrannis!”