Iran’s Supreme Leader, Ayatollah Ali Khamenei, no doubt knows the outcome of Friday’s, June 14 elections. My money is on Saeed Jalili, Iran’s nuclear negotiator whose job it has been to talk the other negotiators into a stupor while work toward the creation of Iran’s nuclear weapons program continues.

Meanwhile, Gulf States are rather nervous about word that Iran’s nuclear reactor is said to have cracks in its structure due to a recent earthquake. Chernobyl anyone?


This will be the eleventh presidential election in the history of Iran since Ayatollah Ruhollah Khomeini seized control of the nation in 1979, forcing the Shah to flee. When he died, Khomeini’s coffin was treated like a piñata by the adoring crowd who jostled to touch it.


It doesn’t matter who wins the predictably rigged elections. Recall that in 2009 the reelection of Mahmoud Ahmadinejad led to eleven days of protests in Tehran that were brutally suppressed. They were shouting “Death to the dictator.” Asked to comment at the time, President Obama said "It is not productive, given the history of US-Iranian relations to be seen as meddling—the U.S. president, meddling in Iranian elections."


The U.S. would like it known that we are not “meddling” in the Syrian civil war in which an estimated 93,000 have died at this point and 1.5 million have fled. Or that sending a billion dollars to Egypt—whose leaders hate us—plus fighter jets is not meddling, and with the exception of the occasional drone attack, we are to believe that the U.S. is not meddling anywhere in the Middle East...but I digress.


Clifford D. May, president of the Foundation of Democracies, a policy institute focusing on national security, said it best when he called the elections “meaningless” and reminded us that “The Supreme Leader will still reign supreme. Like his predecessor, he believes Muslims have a religious duty to wage war against infidels, in particular America, the ‘Great Satan’, and Israel, the closer to home ‘Little Satan.’ Iran’s constitution is quite clear; it calls for jihad ‘against the arrogant in every corner of the globe.’ That would be us.” 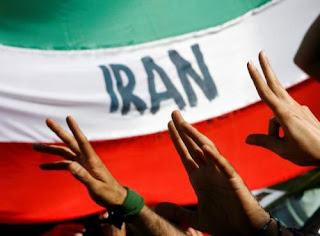 May points out that the ability of U.S. diplomats to grasp the simple truth that Iranian elections are a farce is pockmarked with statements by men like Richard Armitage, then deputy secretary of state under President George W. Bush, who called Iran a democracy. More recently, both Secretary of State John Kerry and Secretary of Defense, Chuck Hagel have said that Iran has an “elected” government and Hagel added that it was “legitimate.”


The elected representatives to Iran’s parliament have no real power. That remains in the hands of the Supreme Leader.


Kerry is apparently enough of a realist to know that the election’s outcome will have no effect on Iran’s nuclear weapons program. “I do not have high expectations that the election is going to change the fundamental calculus of Iran,” said Kerry.


As for the Supreme Leader, Khamenei, the elections are just a charade. A May 3rd report in the International Business Times by Palash Ghosh noted that Khamenei “apparently has a number of surprising side ventures apart from running the Islamic Republic.” An investment firm that he controls reportedly took over the nation’s biggest dealer of German automobiles with tactics reminiscent of the Mafia.


“Khamenei,” wrote Ghosh, “who seeks to propagate an image of austerity and self-denial, reportedly receives substantial payments from Iran’s arms and petroleum industries, while claiming he receives a small salary from the government. Khamenei’s true wealth is estimated to be immense, perhaps in the territory of tens of billions of dollars.”


For the ordinary Iranian citizen and voter, the story is very different. Writing in EuroNews in early June, Shaheen Fatemi asked if the Iranian economy holds any prospect of improvement after eight years of Ahmadinejad’s presidency. “Falling economic indicators, more poverty and unemployment and the fall in the value of Iran’s currency, the rial—these are just part of the negative economic record…”  Oops, for a moment there I thought he was writing about the U.S.


No doubt a phalanx of analysts, columnists, and others will be commenting on Friday’s elections in Iran, but the only thing you need to keep in mind is that they will change nothing.
Real change will only happen when Iranians once again seize control of their government, but that is not going to be easy given the loyalty of Khamenei’s Republican Guard Corps and the bully-boys in his militia known as the Basij.


Like a cop at the scene of an accident, I am inclined to say, “Move along. Nothing to be seen here.”


Alan Caruba's commentaries are posted daily at "Warning Signs" and shared on dozens of news and opinion websites. His blog recently passed more than 2.7 million page views. If you love to read, visit his monthly report on new books at Bookviews. For information on his professional skills, Caruba Editorial Services is the place to go! You can find Alan Caruba on both Facebook and Twitter as well.
Posted by Longstreet at 6/15/2013 01:02:00 AM