The Prospect of World War Three 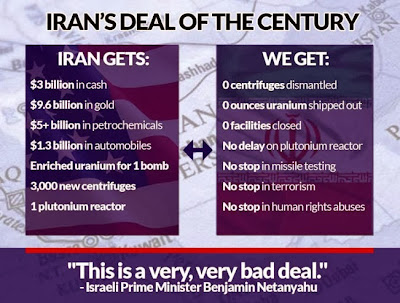 Let me begin by saying that the deal the U.S. struck with Iran on November 24 is so criminally stupid that mobs with torches and pitchforks should be surrounding the White House and Department of State demanding that the President and Secretary of State resign.


How many times does the United States have to make really bad deals with really bad nations? And then call it progress!


In 1994, former President Clinton announced that a deal with North Korea had agreed to “freeze the major elements of its nuclear program.” A new round of talks was scheduled—in Geneva—to dot the i’s and cross the t’s. Virtually the same language was used by President Obama in his late evening announcement of a fundamentally useless, but extremely dangerous agreement with Iran.


Worse than accepting Iran’s deception, it is as if Obama knew nothing of the North Korean deal that subsequently resulted in its development of a nuclear weapon despite some costly bribery exacted for promises it never intended to keep. The worst part of this is Obama’s deception of Congress and the American people. Efforts to grant Iran the status of a new nuclear power had been secretly going on for a year behind the back of Congress.


On hearing of the deal, Rep. Mike Rogers said “That’s the one thing the whole world was trying to stop them from doing,” referring to the permission granted to continue enriching uranium. “We made this mistake in Pakistan. We made this mistake in North Korea. History is a great judge here and great teacher. Why would you make the same mistake to a nation that will proliferate a nuclear arms race in the Middle East if they are successful at getting a nuclear weapon?”


It is important to keep in mind that not just the U.S. is a signatory to this agreement, but also the United Kingdom, Germany, France, Russia and China. It was facilitated by the European Union. The lessons of history were totally ignored. The sanctions imposed by the United Nations on Iran were ignored.


For years many have taken comfort in the knowledge that, in the past, Israel destroyed the nuclear reactors that were being built in Iraq and more recently in Syria. An attack on Iran’s nuclear facilities was assumed to have the support of U.S. military power in the event that Iran would retaliate either directly or through its terrorist proxies, Hezbollah in Lebanon and Hamas in Gaza.


It is clear now that Obama has abandoned Israel as well as Saudi Arabia which also regards Iran as its enemy. Obama has embraced America’s enemy since the Islamic revolution in 1979. He has not brought us closer to peace. He has brought the world closer to World War Three. 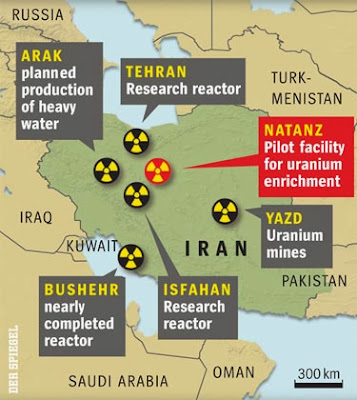 I am not a military strategist, but one need not be to understand Israel’s peril or the limits on its ability to attack Iran’s nuclear facilities, many of which are underground or heavily defended.


Here are some comparisons:


The comparison of their military capabilities is equally daunting. A sobering analysis is offered on the website of the Jewish Virtual Library.


Even if Israel were to attack Iran’s nuclear facilities, it would also have to fend off massive rocket attacks from Hezbollah and Hamas.


What defies Obama’s reasoning is Iran’s long history of attacks on the West. It has specialized in taking hostages, initially in Lebanon from 1984 through 1992. It seized the American embassy in 1979 and held American diplomats for 444 days. It holds an American cleric as this is being written.


In 2011, the U.S. discovered that Iran had conceived and funded a plot to assassinate Saudi Arabia’s ambassador to the U.S. in Washington, D.C. At the time, the State Department said that the thwarted plot “underscored anew Iran’s interest in using international terrorism—including the United States—to further its foreign policy goals.”


Obama’s ability to thwart Iran’s nuclear ambitions and its intent to become a Middle East hegemon through diplomacy does not exist.


A race to acquire nuclear arms has begun in the region where Israel and Pakistan already have them, as does India and China. Saudi Arabia has announced its intent to secure nuclear weapons.


One can only conclude that this interim agreement is a repeat of the appeasement that occurred in Munich when European nations sought a similar agreement with the Nazi regime. The lessons of history are unforgiving.