One Less Communist Leader In The World ... J. D. Longstreet 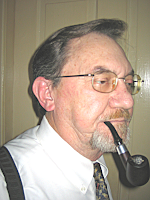 As you may have gathered from the title to this piece, I am no fan of Nelson Mandela.  I never have been.  Mr. Mandela was a communist -- and a terrorist -- and I have no sympathy for either.

Consider this written by Colin Freeman, and Jane Flanagan in Cape Town, South Africa, for The Telegraph, a UK newspaper:

"For decades, it was one of the enduring disputes of South Africa's anti-apartheid struggle. Was Nelson Mandela, the leader of the African National Congress, really a secret Communist, as the white-only government of the time alleged? Or, as he claimed during the infamous 1963 trial that saw him jailed for life, was it simply a smear to discredit him in a world riven by Cold War tensions?

Now, nearly half a century after the court case that made him the world's best-known prisoner of conscience, a new book claims that whatever the wider injustice perpetrated, the apartheid-era prosecutors were indeed right on one question: Mr Mandela was a Communist party member after all."

The article goes on to say:

"But research by a British historian, Professor Stephen Ellis, has unearthed fresh evidence that during his early years as an activist, Mr Mandela did hold senior rank in the South African Communist Party, or SACP. He says Mr Mandela joined the SACP to enlist the help of the Communist superpowers for the ANC's campaign of armed resistance to white rule.

His book also provides fresh detail on how the ANC's military wing had bomb-making lessons from the IRA, and intelligence training from the East German Stasi, which it used to carry out brutal interrogations of suspected "spies" at secret prison camps."  SOURCE:  http://www.telegraph.co.uk/news/worldnews/nelson-mandela/9731522/Nelson-Mandela-proven-to-be-a-member-of-the-Communist-Party-after-decades-of-denial.html

Over the next few days you are going to experience just how thorough the brainwashing of the world's leftist media by the communists has been -- and we will all practically drown in the slobbering adulation over the life and death of a brother socialist/communist "fellow traveler" splashed wall to wall, 24/7, by that same media as they react with Pavlovian exactitude to their programming beginning in grade school and growing with intensity as they progressed through their journalist training in, and out, of college and, finally, into the newsrooms of the world's most powerful media empires. 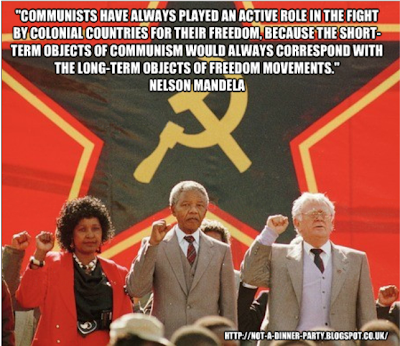 Mandela is a hero ... of the LEFT!  He is no hero of mine.  Far from being the anti-apartheid revolutionary and politician, Mr. Mandela was a communist terrorist and he was arrested, tried, and sentenced to jail -- for life -- and sent to Robben Island to live out his life as a result of his actions. He served 27 years of jail time.

"In conjunction with a number of leading ANC members, they (The Communists) set up a new, nominally independent military organization, known as Umkhonto we Sizwe or Spear of the Nation. With Mr Mandela as its commander, Umkhonto we Sizwe launched its first attacks on 16 December 1961.

Its campaign of "sabotage" and bombings over the subsequent three decades claimed the lives of dozens of civilians, and led to the organization being classed as a terrorist group by the US."  (Emphasis mine)  SOURCE:   http://www.telegraph.co.uk/news/worldnews/nelson-mandela/9731522/Nelson-Mandela-proven-to-be-a-member-of-the-Communist-Party-after-decades-of-denial.html

Nelson Mandela was on a US terror watch list until 2008 and while he was still a prisoner on on Robben Island, Britain’s late “Iron Lady” Margaret Thatcher described his African National Congress as a “typical terrorist organization.”

Below is the list of charges and munitions  against Mr. Mandela at his trial:

"• One count under the South African Suppression of Communism Act No. 44 of 1950, charging that the accused committed acts calculated to further the achievement of the objective of communism;

• One count of contravening the South African Criminal Law Act (1953), which prohibits any person from soliciting or receiving any money or articles for the purpose of achieving organized defiance of laws and country; and

• Two counts of sabotage, committing or aiding or procuring the commission of the following acts:

1) The further recruitment of persons for instruction and training, both within and outside the Republic of South Africa, in:

(a) the preparation, manufacture and use of explosives—for the purpose of committing acts of violence and destruction in the aforesaid Republic, (the preparation and manufacture of explosives, according to evidence submitted, included 210,000 hand grenades, 48,000 anti-personnel mines, 1,500 time devices, 144 tons of ammonium nitrate, 21.6 tons of aluminum powder and a ton of black powder);

(b) the art of warfare, including guerrilla warfare, and military training generally for the purpose in the aforesaid Republic;

(ii) Further acts of violence and destruction, (this includes 193 counts of terrorism committed between 1961 and 1963);

(iii) Acts of guerrilla warfare in the aforesaid Republic;

(iv) Acts of assistance to military units of foreign countries when involving the aforesaid Republic;

(v) Acts of participation in a violent revolution in the aforesaid Republic, whereby the accused, injured, damaged, destroyed, rendered useless or unserviceable, put out of action, obstructed, with or endangered:

(a) the health or safety of the public;
(b) the maintenance of law and order;

(c) the supply and distribution of light, power or fuel;
(d) postal, telephone or telegraph installations;
(e) the free movement of traffic on land; and
(f) the property, movable or immovable, of other persons or of the state.

This is a excellent example of the rehabilitation of a reputation by the political left through extensive use of the media -- including the entertainment media. But, most importantly, it is an even better illustration of the way in which history can be, and is, revised right before our eyes.

For this generation and for those to come, Mr. Mandela will be a hero of mythic proportions.  Those of us who know the truth, and can refute the lies, will soon be gone and will have no influence on the future fairy tale known as history.