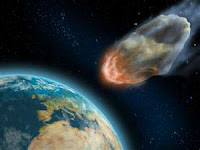 We have seen the action movies about huge fiery asteroids hurtling toward and slamming into earth.  We have sat, glued to our seats,  as action heroes such as Bruce Willis, and even Clint Eastwood, save earth from certain destruction.

My friend Zeb, when told of the current threat, said:  "This ain't no movie!"  Zeb's right.  This not a movie, at all.  It is, apparently, the real thing.

At the moment DA14 is expected to just barely skim by the earth closer, even, that some of our satellites hanging in geosynchronous orbit above us right now.

The problem is, as I understand it, there is almost no room for error in calculations -- and -- there are a number of things which could affect the path of the asteroid -- any one of which COULD cause it to drop closer to earth's surface, or even smack us with a direct hit.

Thanks to the folks in Washington, who continued to milk NASA's budget, over the past couple of decades, or so, we haven't a chance of building a "spaceship" to go out and confront the asteroid and destroy it.  So, in effect, we people of earth are, indeed, a sitting duck.  The experts tell us it would take at least two years to build a ship and we have less that one year before the asteroid either hits us or skims by so close it will make our hair stand on end.

DA14 is estimated to be some 60 meters across.  That would translate to somewhere just under 200 feet in diameter.  Should it collide with earth it would have the power of a rather large thermonuclear bomb.

NASA expert Dr. David Dunham is reported to have said:  " There is a possibility the asteroid will collide with Earth, but further calculation is required to estimate the potential threat and work out how to avert possible disaster ... ."  He went on to say:  "“The Earth’s gravitational field will alter the asteroid’s path significantly. Further scrupulous calculation is required to estimate the threat of collision,” said Dr. Dunham. (as transcribed by Russia’s Izvestia.) “The asteroid may break into dozens of small pieces, or several large lumps may split from it and burn up in the atmosphere. The type of the asteroid and its mineral structure can be determined by spectral analysis. This will help predict its behavior in the atmosphere and what should be done to prevent the potential threat,”(SOURCE:   http://rt.com/news/paint-asteroid-earth-nasa-767/ )

Turns out ... there is very little we can do, not only because it is so late, but because it will be so close to earth.

Now we learn that this asteroid has been orbiting the earth for at least three years.  Some reports say it has actually crossed the path of the earth a number of times.  So ... where is all the fancy equipment we all saw in the movies that detect such threats from space --  and even more important -- where are the plans to deal with a threat like asteroid 2012 DA14?

There is no equipment -- at least not like we saw from Hollywood.  And there are no plans.  Well, that's not quite true.  There are plans -- still on the drawing boards.

OK.  So what if we get lucky ... again ... and this thing just whizzes on by without creaming us.  Great, huh?  Yeah, but it will come screaming back in 2056.  Of course, that will my grandkids problem then.

Two things I wonder about:  How much damage will it cause if it collides with earth -- and at the risk of crying over spilt milk --- why the heck didn't our brainiac scientists see this thing coming before now?

Want a  geographical reference?  OK.  Rhode Island is 1213 square miles in size. ( The county in which I reside is 954 square miles)

But why didn't our scientists, astronomers and such, see this hunk of galactic rock and identify the threat much earlier?  Now, I could offer a rambling pseudo-scientific answer that might be comforting to you, but it would be a total lie because, frankly,  I haven't a clue!

You may recall the US military actually shot down a piece of some sort of obsolete space lab, which was reported to be a falling threat (with a dangerous cargo aboard) to earthlings just a few years ago -- and they did it with existing technology... and possibly a bit of pure luck.  Could we not take a shot at it with the same weapon?  Again, I don't have a clue.

The worst of it, at least for your's truly, is feeling like the proverbial "sitting duck."  I don't like it ... at all.

Please don't give me the "c'est la vie" response.  I suspect that is partly to blame for our being a target in the galactic shooting gallery.  I mean -- this is NOT an uncommon occurrence.  Strip all the water and foliage off our little planet and it has the appearance of a golf ball.  No.  Its not like we didn't know there was/is a chance we will be struck with another chunk of planetary debris from Mother Nature's slingshot.

Well, maybe I'm upset for nothing.  According to the experts on the ancient Mayans and their astronomical expertise with calendars (as well as their advanced ability to predict the future) the end of the world is currently scheduled for December 21st of 2012, anyway.

So what's to worry about, huh?  Nothing, I suppose, so long as it was not the SAME scientists who interpreted the Mayan calendar who also decided Asteroid2012 DA14 was not going to be a problem for earth.

I pray for this, this is what we need, a real crisis on extinction level to save humanity and make us all come together for a greater good. Stop all the sensless greed, an the, Me Me Me crap. This could be a spritual event for all of humanity!!!