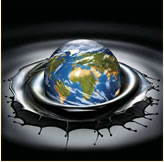 I suspect that most people think the Earth is running out of oil or that the U.S. and the rest of the world are “addicted” to its use.

Both beliefs are wrong, but in different ways. First because the Earth produces oil in abundance deep within its mantel in ways that have nothing to do with dead dinosaurs and gives no indication of ever stopping this natural process and, second, because the use of oil for fuel and for thousands of other applications, not the least of which is plastics, is one of the great blessings of modern technology and life.

All this is made dazzlingly clear in Dr. Jerome R. Corsi’s new book, “The Great Oil Conspiracy” ($22.95, Skyhorse Publishing). By way of explaining why there is so much oil within the planet Dr. Corsi tells the story of the Nazi regimes development of synthetic oil after German scientists “cracked the code God built into the heart of chemistry to form hydrocarbons in the first place.” Known as the “Fischer-Tropsch” process, it permitted the Nazis to pursue war even though Germany had no oil fields of its own.

The widespread use of the term “fossil fuels” is a deception created by anti-energy propagandists and earlier theorists to make people believe that oil is the result of countless dead dinosaurs and decaying vegetation. Oil, however, is “abiotic”, a term that means it is a natural product of the earth itself “manufactured at deep levels where there never were any plants or animals.”

Corsi writes of Thomas Gold, a professor of astronomy who taught at Cornell University. In 1998 he published a controversial book entitled “The Deep Hot Biosphere: The Myth of Fossil Fuels” in which he applied his knowledge of the solar system, noting that carbon is the fourth more abundant element in the universe, right after hydrogen, helium, and oxygen. Gold pointed out that “carbon is found mostly in compounds with hydrogen—hydrocarbons—which, at different temperatures and pressures, may be gaseous, liquid, or solid.”

Gold, who passed away in 2004, was way ahead of most other scientists with his assertion that the earth produces oil at very deep levels. While telling the story of how the U.S. went to great lengths to acquire the data regarding synthetic oil production as our military overran Germany and then took care not to let the public know about. It was, after all, our own oil industry that had provided the fuel that aided the war effort in both theatres.

Correspondingly, the oil industry had no reason to develop “relatively expensive synthetic oil when billions of dollars in profits could be made annually bringing to market naturally produced and reasonably priced hydrocarbon fuels, including crude oil and natural gas.”

This mirrors the efforts of “renewable” energy producers, wind, solar, and biofuels like ethanol, to profit at the cost of billions of dollars in subsidies and loan guarantees paid for by taxpayers along with higher electricity and gasoline bills paid for by consumers; all of which are mandated by the federal government. It is pure crony capitalism to enrich a few at the expense of all the rest of us. None of these alternative forms of power could exist or even compete without such government mandated support.

As Dr. Corsi points out, “Eliminating the fear that the world is running out of oil eliminates an urgency to experiment with or to implement alternative fuels including biofuels, wind energy, and solar energy as long as these energies remain less energy-efficient, less reliable, and more costly than using oil and natural gas.”

There are, in fact, “more proven petroleum reserves than ever before, despite the increasing rate at which we are consuming petroleum products worldwide” says Dr. Corsi, noting that the Energy Information Administration of the U.S. Department of Energy, in on record that “there are more proven crude oil reserves worldwide than ever in recorded history, despite the fact that worldwide consumption of crude oil has doubled since the 1970s.”

So tell me why, since the Obama administration took over, have gas prices per gallon risen from $1.84 to $3.80 now, a rise of 105%? The American Energy Alliance compared costs between 2009 and 2012, publishing them to reveal that we are all paying more for energy. The average monthly residential electricity bill has increased 6% and annual household energy expenses have increased 31%.

At the same time, the Obama Department of Energy increased new rules whose implementation cost more than $100 million each 141%! The Environmental Protection Agency increase of such regulations increased 40%, the Department of the Interior, 13%.

Total regulatory costs (all sectors) went from $1,172 trillion in 2009 to $1,752 trillion today! If you were trying to bankrupt the energy sector and its consumers, this is a great way to do it.

The Obama administration came into office declaring a war on coal, further restricting oil and natural gas exploration on federal lands and offshore, and wasting billions on solar, wind, and biofuel companies. That in itself would be reason enough to turn them out of office.

The Earth is not running out of oil and likely never will.