The "Gungrabbers" Are Coming For Your Guns Just As We Warned They Would!

Now that the Socialists have taken over the government of the United States, they need to insure they can maintain their control and they cannot be sure of that as long as we citizens are armed. So they MUST relieve you and I of our firearms. Enter “Blair Holt's Firearm Licensing and Record of Sale Act of 2009”. 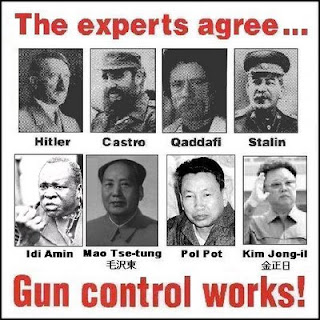 There’s a better than even chance that you haven’t heard about it. With the Mainstream Media in the United States comfortably ensconced in the pockets of the Democrats very little is being said, if anything, about the Blair Holt's Firearm Licensing and Record of Sale Act of 2009. Rest assured, dear reader, it is pending federal legislation in Congress today! (H.R. 45) Representative Bobby Rush of Illinois, a Democrat, introduced the bill on January 6, 2009.
“The main objective of the bill is to provide for stricter gun control. A person would be prohibited by law from possessing a firearm unless approved by a state run system or been issued a license that would have to be renewed every five years within thirty days of the expiration date.
The Attorney General would set up a tracking system of all sales with dealers having to be licensed. Production figures of each licensed manufacturer would be made public.
All those current licensed gun owners would have two years to become certified by the Attorney General or risk losing private property or becoming a criminal.” (From Wikipedia: HERE.)
When you read the bill you quickly realize it targets all gun owners in the U.S.A.
This bill is an outrage! It seeks nothing less than to strip you and me of our 2nd Amendment constitutional right to keep and bear arms. When you read the bill you will also learn that two years after the passage of the bill, ALL FIREARMS in a citizen’s possession must be registered, not just those purchased after the bill passes, and this apparently applies to antique firearms as well. Further… every five years, if you own a firearm, you must go through a complete renewal process for each weapon you own! If you don’t do it, for whatever reason, there will be stiff penalties, which include the confiscation of your firearms and jail time with sentences as high as ten years in some cases.
And that is not even the worst of it. Nosiree! The bill also authorizes government searches without warrant, the creation of a federal bureaucracy to monitor firearm possession, etc. 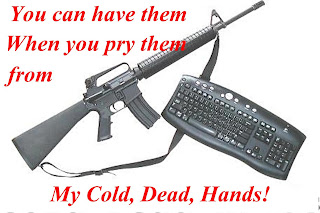 There is an excellent summary of the bill HERE.
Is it time for the next Boston Tea Party? There is an excellent article on that HERE.
With Democrats in control of the US Government, American citizens always need to guard such liberties as gun ownership even more closely. THIS is what happens when you trade freedom for security!
Back in September of 2007, we wrote the following: “What’s happening, all of a sudden, to bring on these “gun stories?” Well, the Left is feeling it’s oats right now. They have reason to believe they will win the 2008 Presidential election and… if they do… and if they retain control of the two houses of Congress, you can “bet the farm” that gun control legislation will be among the first items on the New Congress’ agenda of things to pass.”

I’m not a prophet, but I AM an ole country boy, with a smidgen of common sense, and THAT is all it took to divine where a government run by democrats would take us.

Why is gun control so popular among the Leftists of the world? Simple. As long as we citizens are armed we can shut down the Left any time we feel they have stepped too far over the line to be tolerated. They know that. They also know that they have come very close to that line on a number of occasions. They got the message. So now the socialists in charge of the US government feel they have to power to disarm us and secure their grasp on the throats of the American citizen and they’re going for it. What they fail to grasp is the fact that those of us on the Right understand that Obama, and his fellow socialists in the Congress, are on the point of the spear of the movement to transform America from a democratic republic to a socialist hellhole. It’s not going to happen without a fight.

Some of the democrats also understand that they cannot depend upon the US Military to back them up in this move to solidify their hold on America by shredding the Constitution and stripping their fellow Americans of their Second Amendment rights. The US Military are American citizens, too, and they have their own private collection of weapons. Plus, the vast majority of them favor the right to keep and bear arms… and… they took an oath to protect this country from all enemies, whether foreign or domestic. The democrats cannot trust them to back the government’s move on it’s own citizens.

Look, it’s very simple: For the Democrat’s socialist dream to be successful American citizens must give up their guns. We’re not going to do that. So, the current socialist government of the United States is going to try to take them.

The gun won this country from the Mother Country. The gun secured the remainder of the country between the two oceans and the gun has made us a free people and the gun has kept us free. So far, we have not forgotten that.

Congress had better understand. Americans are not going to give up their guns. If they pass this hellish bill into law, it will make criminals out of well over 85% of all Americans. I still have faith that my fellow Americans are willing to fight to protect their constitutional rights and their country even if that means opposing what millions of Americans consider as a rogue government in Washington.

As the US Navy Chaplain said during the Japanese attack on Pearl Harbor while he helped load the anti aircraft weapons firing at the Japanese warplanes slaughtering our service men and decimating out fleet: “Pass the Ammunition boys, and we’ll stay free.”

Get ready, my fellow Americans. It gives me a great deal of pain to warn you that all hell is about to break out within America.