Agenda 21 is a United Nations resolution and treaty that remains unratified by the United States Senate, and therefore is not a treaty we are required by the law of the land to conform to.  The members of the liberal left ideology will claim, if they are familiar with it, that Agenda 21 is a mandate, or should be.  The sinister realities of the program has been oozing out, however, so the name is currently being changed to "Future Earth" because the truth getting out has given the term "Agenda 21" a negative connotation.  What it is, according to its proponents, is a "voluntary" United Nations inspired plan of action to save the planet.  The key characteristics, according to its supporters, is to work through organizations and governments around the globe to ensure the environmental sustainability of our planet.

According to the U.N.’s own website, Agenda 21 is a “comprehensive plan of action to be taken globally, nationally and locally by organizations of the United Nations system, governments and major groups, in every area in which human has an impact on the environment.”

In other words, humanity is a danger to the environment, and actions must be taken to reduce humanity's impact on nature in order to save the planet.  The sustainability of our existence on this planet depends on us taking action now, according to the Agenda 21 faithful, and such actions include taking governmental control of privately owned lands (through a one-world government, if necessary), depopulation (population control through the means of birth control, abortion, and a forced reduction in population that is not fully defined), and herding people out of the rural areas and into the population centers so as to impact the areas outside of the cities as little as possible. 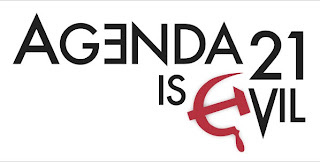 What this all means is that the government, guided by international and globalist urgings, is poised to dictate to you where you can live and what land should be designated for a fully-realized Agenda 21 plan.  Ultimately, it is intended for all of these lands to be controlled by the United Nations and a future one-world government. To achieve this eventuality, nations must relinquish their sovereignty, the population must abandon nature's realm. To manage so many people in the cities the population of the planet must be dramatically reduced, and the population must be maintained by government dictates within the cities.

The claims offered by those that support Agenda 21, of course, do not contain the insidious aims that includes actions by the governments and United Nations that only George Orwell, Karl Marx, and Adolf Hitler could have dreamed up.  The proponents of "Sustainable Development" insist that the plan's human resettlement actions will improve the social, economic and environmental quality of human settlements, as well as protect the outside environment from human habitation, while improving the living conditions and working environments of all people, in particular the urban and rural poor.  Cooperation within this new collective is necessary, and with the help of government (of course if you refuse to cooperate, you will be forced to do so by the body politic, for the good of the community under the wise hand of the ruling elite) the improvements to our society will be based on us working together using greater technology, and partnerships between all of the sectors (in other words the government will control the public, private and community sectors).

Because wealthy white men have always been the power curve (according to the liberal left) the decision-making process will be handled by community groups and special interest groups such as women, indigenous people, the elderly and the disabled.

Agenda 21 represents the ultimate collective approach to national settlement strategies. The development of these strategies will require countries to set priorities based on their social and cultural capabilities, making appropriate provisions to monitor the impact of their strategies on marginalized and disenfranchised groups, with particular reference to the needs of women.

By moving the populations in to the cities, the government will need to ensure adequate shelter for all, while managing the human settlement from a centralized location so that individuality and local politics do not interfere with the ruling elite, through their immense wisdom that I am thinking they believe would rival the Great and Powerful Wizard of OZ, improving life for the human collective.

While managing the populations in the population centers, the centralized governmental system will then be tasked with promoting sustainable land-use planning and management which will include reducing human settlements in the rural areas to minimally necessary levels, as defined by the ruling elite.  In other words, private property ownership will become a thing of the past, and so will rural-living.

Meanwhile, the government must also take care to ensure that they properly manage, without hurting the outside environment, the environmental infrastructure, including water, sanitation, drainage and solid-waste management, while promoting sustainable energy and transport systems in human settlements (in other words regulate your energy usage and where you are allowed to travel).

Ultimately, they will eliminate the private ownership of any conveyance, demanding that the population use only public transportation, and never leave their assigned region.

The Bible says that the great counterfeiter reveals himself as an angel of light.

Worse, the proponents of Agenda 21 have managed to slip it under the radar, using the school system, media, and entertainment industry to work Agenda 21 into the everyday thinking of the average citizen, as the politicians works to implement Agenda 21 into everyday life slowly but surely.  This means that you don't realize the insidious nature of it because it is not being put into action in a manner that would concern you, and the indoctrination of our younger generations means that once us younger folks are gone, it is planned that the younger generation will welcome the tyranny of Agenda 21 with thunderous applause.

I wondered what the Founding Fathers would think of the sinister nature of Agenda 21 and sustainable development, and then I came across something Thomas Jefferson said about cramming everyone into the cities:

"When we get piled upon one another in large cities, as in Europe, we shall become as corrupt as Europe ." -- Thomas Jefferson

I then wondered about what the tyrants of history would have thought about this, and I came across a quote by Adolf Hitler:

"When an opponent declares,
'I will not come over to your side.'
I calmly say, 'Your child belongs to us already…
What are you? You will pass on.
Your descendants, however,
now stand in the new camp.
In a short time they will know nothing
else but this new community.'"

Douglas V. Gibbs is a longtime Internet radio host, conservative political activist, writer and commentator; he is the host of Constitution Radio and teaches weekly classes on the Constitution in Southern California. Follow him @douglasvgibbs.
Posted by Longstreet at 5/29/2013 03:26:00 AM