According to the Washington Free Beacon -- "Two Bear H nuclear-capable bombers were detected flying into the military’s Alaska Air Defense Identification Zone (ADIZ) near the Aleutians, where a strategic missile defense radar is located, and Alaska’s North Slope region by the Arctic and Chukchi Seas on April 28 and 29, military officials told the Washington Free Beacon."  SOURCE:  http://freebeacon.com/bears-buzz-alaska-again/ 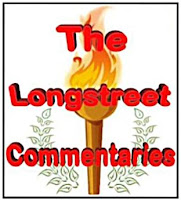 It would appear "ole Vlad" is turning up the pressure on Obama to show some of that "flexibility" he promised Putin he would have after he was elected to a second term.

Those of us who remember the "Cold War," and even served in the US Military during the Cold War, recognize this behavior by the Russians as a form of bullying at which they are past masters.  It was fairly common to see Russian Bear bombers cruising just off North Carolina's coast.

Now that Putin is feeling his oats and endeavoring to reconstitute the old Soviet Union, he has begun showing off Russia's military power and his ability to project same around the world.

"It was the fifth incident of Russian strategic bombers flying against the United States since June, when Bear bombers were intercepted near Alaska during a large-scale Russian strategic nuclear exercise that Russian military officials said involved practice strikes against U.S. missile defense sites in Alaska. 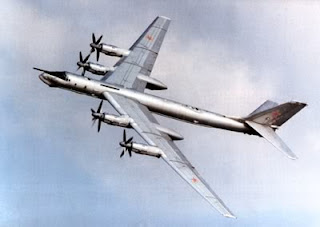 Less than a month later, on July 4, two more Bears flew the closest to the northern California coast that Russian aircraft have flown since the days of the Soviet Union.

Then in February two Bears circled Guam, a key U.S. military hub in the Pacific.

Russia continues to rebuild their armed forces while the US -- under Obama -- continues to, basically, disarm its military.

The US can expect more of these probes by Russia, and soon, we expect, from China, as well.

Obama projects weakness.  Maybe that is because he IS a weak leader. NOTHING invites trouble more than the the appearance of weakness.

Now that Obama has announced the US will focus on the Pacific region, the US is squared -off with Russia and China. Problem is -- we don't have the wherewithal to go toe to toe with those two arch enemies of the US -- not any longer.

There is an expression used in the popular HBO series Game of Thrones -- "The night is dark, and full of terrors."  This descriptive phrase could easily be adapted to  read: "The WORLD is dark and filled with terrors"  and be accurate and applicable to the world we live in today.

Those of us who live in the real world know and understand this and we attempt to take every precaution available to us to protect against such terrors.

The folks on the political left, however, (at least in America) don't live in the same world as the rest of us.  The world in which they live is a fairy-tale land where everyone sits around in a circle and sings "kumbaya."

Theirs is a world in which all danger can be neutralized by talking out differences and negotiating.  It is a land of group hugs where everyone is equal, everyone is a part of the collective, and the world and life is always "fair."

Their world is a utopia. In other words, it doesn't exist.  It is a true "pipe" (as in opium pipe!) dream. "Utopia" is a book of fiction written by Sir Thomas More (1516) describing the perfect society on an imaginary island.  It isn't REAL! 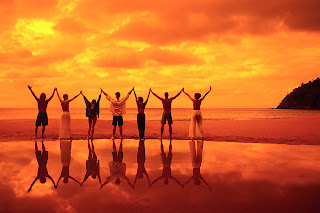 But they don't dare give up their pharmaceutically induced visions of Utopia.  For the moment they do, they will have to face the real world and THAT they cannot do. They are as children in a grownup's world.

One of the less pleasant tasks of the political right, is taking care of the political left. Left on their own they would soon be extinct.  The bullies of the world would have them for lunch. If you question this, I invite you to observe how Mr. Putin will play Mr. Obama like a Stradivarius.

The Bear bomber fly-bys, the probes of our air defenses, all are a part of Putin's reminding Mr. Obama of his promise of more flexibility.  And Putin WILL get it.

Any negotiations with Russia will see the US get the short end of the stick -- or no stick at all.  Expect Putin to make no concessions.  If Obama's record in negotiating with Russia is any indicator, we can expect Obama to make concessions as a form of appeasement.  Appeasement never works, at least not for long.  All it does is move your day in the barrel back a few days.

Ronald Reagan knew and understood that you only negotiate with Russia from a position of strength.  Even if Obama understood that, he couldn't do it.  It just isn't in him. He is weak and indecisive.  He is often referred to as "Hamlet on the Potomac."

None of this has gone unnoticed by the Russians.  So, we can expect to receive more of these not so subtle reminders from Putin through out the remainder of the Obama administration.