The Tears of Benghazi ... Alan Caruba

The Tears of Benghazi 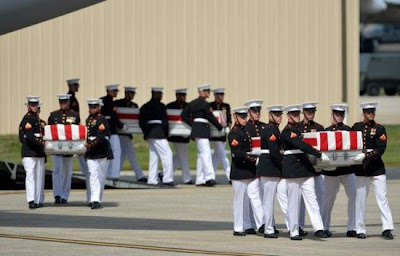 The Hollywood version of heroes is that of large, muscular men who show no fear and little emotion after a confrontation with the enemy. The images that come to mind are Sylvester Stallone, Arnold Schwartzenegger, and Bruce Willis who, while not a muscleman, has the swagger we associate with movie heroes.


On Wednesday, on Capitol Hill, three men, Greg Hicks who was deputy chief of mission in Libya, second in command to the assassinated Ambassador, Chris Stevens; Eric Nordstrom, a diplomatic security officer who was formerly the regional security officer in Libya; and Mark Thompson, a former Marine and an official with the State Department’s Counterterrorism Bureau; sat at a table and gave short statements followed by answers to the questions they were asked.


In real life, heroes often look like someone in middle management. It was wrong—even demeaning—for the media to call them “whistle blowers.” These men were patriots. Who else would go to a war zone to represent their nation or to protect its highest diplomat there?


At the hearing they wore suits and ties. And, when called on to tell the truth, they sometimes choked up from the mix of emotions that flowed through them from memories of colleagues lost in combat and the awful realization that the nation for which they put their lives on the line, the nation they served with honor, left them defenseless to come to the aid of those colleagues.


Looming in the room were the ghosts of the dead ambassador, two security personnel; Glen Doherty and Tyrone Woods were both former Navy SEALS, contracted by the Central Intelligence Agency, and Sean Smith, a ten-year veteran of the State Department and on temporary assignment in Libya as an information officer for the embassy. Smith, an Air Force veteran, left behind two young children.


The testimony was emotional at times as the witnesses had to pause to regain their composure. They were a sharp contrast to the former Secretary of State, Hillary Clinton, who became annoyed by the questions she was asked at a hearing on Benghazi. “What difference does it make?” she replied angrily to a question from Sen. Ron Johnson of Wisconsin.

“With all due respect, the fact is we had four dead Americans. Was it because of a protest or was it because of guys out for a walk one night decided to go kill some Americans? What difference at this point does it make?” Clinton asked the Republican Senator. “It is our job to figure out what happened and do everything we can to prevent it from ever happening again.”


Did she really believe it was just “because of guys out for a walk one night decided to go kill Americans”? On the anniversary of 9/11? Did she and the President really believe that the attack was because of a video? That is what they told Americans in the wake of the attack. That is what our ambassador to the UN, Susan Rice, was sent out to say on five Sunday morning news shows.


What emerged from the hearings was the failure and the refusal of the State Department, the CIA, and the Department of Defense to activate any of the resources they had to send any forces to defend the consulate. Someone had to make a conscious choice to do that. Someone had to tell those forces to “stand down.


As Hicks said, “I am a career public servant. Until the aftermath of Benghazi, I loved every day of my job.” As one watched, his quiet presentation was marked with moments of emotion. He was the last man to speak by phone to Ambassador Stevens. Thompson said he was rebuffed by the White House when he asked for specialized team known as FEST—men trained specifically to response to an attack. Asked how a team of Special Forces personnel were not given authorization to fly from Tripoli to Benghazi responded, Hicks said “They were furious.”


Rep. Darrell Issa, (R-CA) the chairman of the House Oversight and Government Reform Committee, told Fox News, “The question is, where’s the accountability for lying to the American people?”


That’s what the President of the United States did. That’s what the former Secretary of State did. And that’s why the White House Press Secretary, Jay Carney, replied to a question about Benghazi dismissing it saying the attack had happened “a long time ago.”


The loss of the lives of four patriots and the testimony of their colleagues, still mourning their loss, is sad, but how much sadder still is the fact that our great nation is led and represented by such soulless people?


Alan Caruba's commentaries are posted daily at "Warning Signs" and shared on dozens of news and opinion websites. His blog recently passed more than 2 million page views. If you love to read, visit his monthly report on new books at Bookviews. For information on his professional skills, Caruba Editorial Services is the place to go! You can find Alan Caruba on both Facebook and Twitter as well.
**********************
VISIT J. D. Longstreet's "INSIGHT on Freedom" Face Book Page!!:   (Just click on the link for more conservative commentary by J. D. Longstreet and other popular conservative writers!)
***********************