The President as Sergeant Schultz 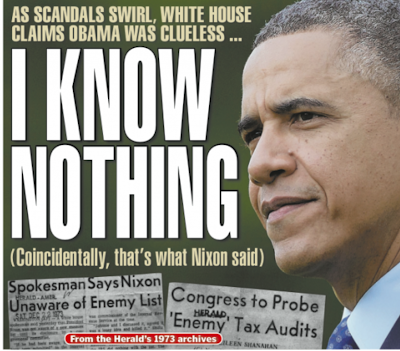 How is it that, time and again, the most powerful man on the planet doesn’t seem to have a clue what is happening in his own government? Famed for never accepting blame for anything, the more I see President Obama these days, the more I am reminded of Sergeant Hans Schultz of the TV sitcom, “Hogan’s Heroes”, that ran from 1965 to 1971. 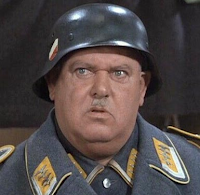 The wonderful John Banner the actor who played the prisoner of war guard left an indelible legacy with his repeated denials, “I know nothing. I hear nothing, and I see nothing”; often all three at the same time to avoid being implicated in Col. Robert E. Hogan’s manipulation of Werner Klemperer’s Col. Wilhelm Klink, the camp commandant of Luftwaffe Stalag 13.


Obama’s way of dealing with everything has been to talk it to death and he has been responding to questions from the press, claiming that the accusations are all “a sideshow” or that “there’s no there, there.” It is not working. In the case of Benghazi-Gate, his lies are so blatant that it has gone from an embarrassment to a full-fledged cover-up.


Similarly, the Attorney General, Eric Holder, has relied on claiming ignorance and putting distance between himself and his Department of Justice’s increasing list of scandals, from Fast and Furious that earned him a citation for contempt of Congress in June 2012 for his lack of candor. His latest “I know nothing” testimony regarding the DOJ’s seizure of the phone records of Associated Press editors and reporters makes one wonder why the President continues to retain him in office or, for that matter, why he isn’t in jail for stonewalling about Fast and Furious, an ATF gun-running scheme that got a border patrol and ICE agent killed.


Those of us who follow the President closely know that he has been lying consistently before and since being elected--twice. His two “memoirs” have been picked apart by reporters who have written their own books on the subject. It would appear that Obama picked up the habit of lying early on in life as the son of a Kenyan who had abandoned his mother, the step-son of an Indonesian whom his mother also divorced, and a man who remarkably was a friend or associate of a long list of shady characters you might more likely find in a detective novel.


He dismissed his close friendship with former 60s Weatherman terrorist, Bill Ayers, as someone who lived in his Chicago neighborhood. He had to throw his longtime pastor, Jeremiah Wright, under the bus when it became known he said many bad things about America over the course of the many years Obama was a member of his church. The man who conducted Obama’s wedding and christened his children said of 9/11, “the chickens have come home to roost” as if it was America’s fault it was attacked.


Even so, this is small potatoes compared to the way the many “renewable energy” companies received billions in government loans and rapidly went bankrupt. It turned out that many of the many of the men who created those companies where major “bundlers” and contributors to his 2009 presidential campaign. Of the most famous bankruptcy, Solyndra, Obama said, “That was not our program, per se. Congress-Democrats and Republicans—put together a loan guarantee program…” Maybe so, but we have not seen such a program lose so much money in such a short time, betting on solar and wind power projects. The taxpayers got stuck with the bill. The number of actual “green” jobs ended up costing over a million dollars each to create.


Of his failed “stimulus” package, Obama said “Apparently there weren’t as many shovel ready jobs as we thought.” Before spending millions to allegedly revive the economy, you are supposed to know such things.


If not Benghazi-Gate, than the IRS targeting of conservative, patriot, and constitution education groups could provide the fulcrum to bring down Obama’s presidency. Despite his denials of knowledge about the program within the IRS to harass and deny these groups non-profit status, vital to raise donations and funding, and the firing of the IRS commissioner, this is a scandal with which ordinary taxpayers can identify, fearful of audits. Imagine now as the realization sinks in that it is the IRS that will be administering Obamacare!


Up to now Obama could count on the mainstream media to ignore much of the blunders, failures and lies that characterized his first term, but the scandals coalescing as his second term begins have a weight that includes the growing unhappiness of the White House press corps who are tired of being lied to or having to listen to press secretary Jay Carney speak to them as if they were a bunch of witless clowns.


It is said that “the fish stinks from the head” and what we are witnessing is an administration whose corrupt political practices have seeped deep into the government agencies for which Obama is responsible.


It is still too soon to know which scandal or combination of scandals will bring down his presidency, but it will only take a few more eye-witnesses and whistle-blowers to turn Obama into the Wizard of Oz, hiding behind the curtain and pulling the levers to fool Dorothy and her pals or, in our case, those of us who still believe laws should be obeyed and power should not be abused.


Alan Caruba's commentaries are posted daily at "Warning Signs" and shared on dozens of news and opinion websites. His blog recently passed more than 2 million page views. If you love to read, visit his monthly report on new books at Bookviews. For information on his professional skills, Caruba Editorial Services is the place to go! You can find Alan Caruba on both Facebook and Twitter as well.
***********************