The Arabs are the New Jews ... Alan Caruba

The Arabs are the New Jews 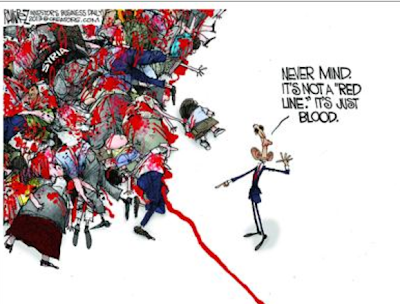 The debate about whether or when to inflict some “punishment” on Syria’s Bashar al-Assad put me in mind of the run-up to World War II when the U.S. State Department was reluctant to admit German Jews seeking sanctuary and, after the D-Day invasion, the discovery of the Nazi death camps where six million Jews from around Europe perished.


So long as it was Jews doing the dying, the world just didn’t care that much and now, so long as it is Arabs—over 100,000 Syrians—the world still doesn’t care.


Moreover, the Arabs of the Middle East have given the West little reason to be concerned for their lives. Who has killed more Arabs than any other group? Arabs. The jihadists have bombed and murdered their fellow Muslims with abandon and continue to do so.


Poison gas was used by Saddam Hussein and is being likely used by both Assad and the rebels seeking to overthrow him.
It is the poison gas the West fears, not the fate of the Syrians or other Arabs.


The nightmare that the West refuses to confront is a nuclear-armed Iran. If and when the Israelis—Jews—take action to disable the Iranian nuclear operations, they will have saved themselves and the West.


Congress will likely approve some kind of authorization for the President to take some action. The draft that the White House sent was deemed too broadly written so the lawyers in Congress will fret it about with limits. That’s a good thing because whatever Obama does will be an act of war and a rather futile one at that.


An article in the September 2 World Tribune reported that “President Barack Obama has encountered vigorous resistance from the military to his plans to attack Syria.”


Assad will have plenty of time to continue waging war on the Syrian rebels. He’s too busy killing Syrians who, true to the tribal nature of the region, will remain busy killing Alawites, Christians, Druze, and others. Neither the Russians, nor the Iranians want a bigger war. They want a seaport and a pipeline respectively.


Congress will also have to find a billion dollars with which to pay for the missiles we use and to replace them. A nation that is $17 trillion in debt doesn’t have the money to wage a war. A short, symbolic slap will have to suffice.


There will be no “boots on the ground.” Our army is worn out by more than a decade of fighting in Afghanistan and Iraq. Our air force is flying a lot of old planes. Our navy has been reduced to less vessels than are needed in a dangerous world. Mostly, though, Americans are understandably just tired of fighting in the Middle East and achieving nothing.


If we could find and kill Osama bin Laden, there is no reason why we could not have done the same with Saddam Hussein and now Bashar al-Assad. It’s cheaper and just as effective.


For a while, Bashar was the darling of the liberals in Congress. Nancy Pelosi visited him. In 2007, despite White House objections, she traveled to Damascus to meet with Assad. At the time she said she had “expressed our concern about Syria’s connections to Hezbollah and Hamas” and raised the issue of the sanctuary that Syria was providing those fighting U.S. troops in neighboring Iraq. Then-President Bush said, “A lot of people have gone to see President Assad…and yet we haven’t seen action. He hasn’t responded.”


Ironically, it is now Pelosi who is urging Obama to take military action against Assad.


In 2011 on Face the Nation then-Secretary of State, Hillary Clinton, was asked why the U.S. was not intervening in Syria as it had in Libya. When CBS newsman Bob Schieffer remarked that Assad’s father had killed 25,000 Syrians in Hama in 1982, Clinton replied that Syria had a different leader and one that recent visitors regarded as “a reformer.”


Among those who had visited Assad was then-Sen. John Kerry, the Senate Foreign Relations Committee chairman, who had been there at least six times; most recently in November 2010. He pushed hard to re-engage the Assad regime and notably without any success.


Assuming Congress lets President Obama wipe the egg from his face over his “red line” comment, Assad will respond with the usual threats and go back to killing Syrians. Having seen the U.S. response to the use of poison gas, it will likely be removed and transported to Iran. It is likely that it originated in Iraq.


So long as it is Arabs dying, the West and the rest of the world is unlikely to intervene. The U.S. tried that. It did not work out well.