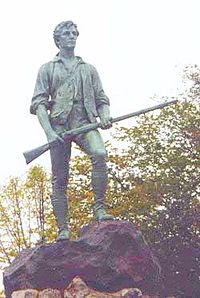 I’ll bet that you did not know that today is Patriots Day! Well, it IS! It is a real, live, CIVIC holiday set aside to honor, specifically, the minutemen who stood against the British at Lexington and Concord. These were the very first battles that kicked off the Revolutionary War in America, which led directly to our independence from Great Britain.

Here is a bit more from Wikipedia on Patriots’ Day:

Patriots' Day (sometimes incorrectly spelled Patriot's Day or Patriots Day) is a civic holiday commemorating the anniversary of the Battles of Lexington and Concord, the first battles of the American Revolutionary War. It is observed in the Commonwealth of Massachusetts[1] and state of Maine[2] (once part of Massachusetts), and is a public school observance day in Wisconsin[3]. Observances and re-enactments of these first battles of the American Revolution occur annually at Lexington Green in Lexington, Massachusetts, (around 6am) and The Old North Bridge in Concord, Massachusetts (around 9am). In the morning, a mounted reenactor with State Police escort retraces Paul Revere's ride, calling out warnings the whole way.

You can learn more about Patriots’ Day HERE.

So, now that you know today is Patriots’ Day, how will you celebrate it? Good question, huh? We suggest you display the US flag outside your home or business today. We certainly hope you attended worship services at your church of choice today and gave thanks to God for the men and women who wrenched our freedom from the bonds of a monarch and for all those since who have worn the uniform of our nation’s armed services and sacrificed themselves in order to preserve that freedom so preciously paid for in blood.

At a time in our nation’s history when we stand at the brink of losing that hard won freedom, closer than we have ever been, in my opinion, we need to step back a bit and take a closer look at what we are about to lose. It is good to remind ourselves, and our government, that America is unique in the entire world. Our government is founded on a constitution, the foundation of all the law(s) of the land. Unfortunately, it becomes necessary to remind those who would govern this land that it is not they who have the final say in government, it is the constitution.

Just this week crowds, estimated at one million strong, took to the streets and gathered at their county courthouses, all across the country, in what were referred to as “Tea Parties” to protest our current government’s attempts to take away the rights won for us by the patriots of this blessed land.

We suggest you visit the website of the “Oath Keepers”. You will find them HERE.

Here is the list of ten orders the Oath Keepers say they will NOT obey:

1. We will NOT obey orders to disarm the American people.

2. We will NOT obey orders to conduct warrantless searches of the American people.

3. We will NOT obey orders to detain American citizens as “unlawful enemy combatants” or to subject them to military tribunal.

4. We will NOT obey orders to impose martial law or a “state of emergency” on a state.

5. We will NOT obey orders to invade and subjugate any state that asserts its sovereignty.

6. We will NOT obey any order to blockade American cities, thus turning them into giant concentration camps.

7. We will NOT obey any order to force American citizens into any form of detention camps under any pretext.

8. We will NOT obey orders to assist or support the use of any foreign troops on U.S. soil against the American people to “keep the peace” or to “maintain control.”

9. We will NOT obey any orders to confiscate the property of the American people, including food and other essential supplies.

10.We will NOT obey any orders which infringe on the right of the people to free speech, to peaceably assemble, and to petition their government for a redress of grievances.

The Oath Keepers, on their site, go on to say the following:

“Oath Keepers is an association of currently serving military, veterans, and peace officers who will fulfill the oath we swore to support and defend the Constitution against all enemies, foreign and domestic, so help us God.

Our oath is to the Constitution, not to the politicians, and we will not obey unconstitutional (and thus illegal) and immoral orders, such as orders to disarm the American people or to place them under martial law and deprive them of their ancient right to jury trial.

We Oath Keepers have drawn a line in the sand. We will not “just follow orders."

Our motto is “Not on our watch!”

This very day in America we tread dangerous ground. When Americans feel it necessary to form organizations such as the “Oath-Keepers” it tells us there is a deep concern among the people of the country for American’s freedom. It tells us there is a perception among Americans that their country is in peril. And, say what you will about us crazy Americans, when our constitution, and/or our liberty is in harm’s way we get our hackles up. They’re up now.

When one million normally quiet, reserved, conservative Americans take to the streets to protest government actions, taxes, and the direction the current Congress and Presidential Administration are taking America, THAT is a signal that something is desperately wrong in America.

Well sir, alot of those wre already broken under the Bush administration, we had warrantless searches on American Citizens, we had the IDF (A terrorist organization) taking fire arms from citizens after Katrina. Free speech was eliminated by the police during the RNC in New York in 2004. And on and on I could go about the over reach of government into the private lives of American citizens during the Bush years.... And about the wastefull government spending that he did too. Dissent is not partisan, or in the case of the conservatives, that's all it is. Bill Clinton was the last president to turn in a balanced budget and cut the deficit, soemthing these conservatives never give him credit for. He reigned in another big spender's deficit, a "man" named Regan.