Are Americans Living in a Police State? ... Alan Caruba

Are Americans Living in a Police State? 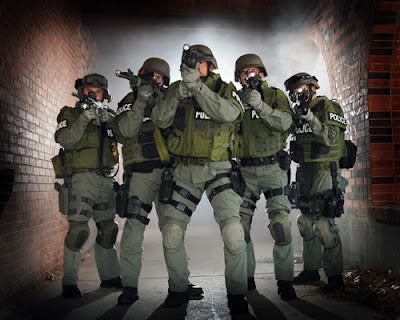 The thing about a police state is that it tends to creep up on you. One day you think the Bill of Rights is intact and the freedoms you take for granted are intact, but the next day you find out that under the National Defense Authorization Act (HR 1540), signed into law by President Obama on December 31, 2011, you can be arrested and detained without recourse to an attorney or the courts.


HR 1540 kills the concept of Habeas Corpus by permitting the detention of U.S. citizens without trail. In 2009 the National Emergency Centers Act, HR 645,  was introduced for the establishment of “internment camps.” I have not been able to determine if it was passed and signed into law, nor have I found any explanation why the Congress of the United States either passed or even considered these laws.


The 2001 Patriot Act was justified as a response to 9/11 and revised in 2012. It gives the government unprecedented powers of surveillance and enforcement in the name of deterring terrorism.


One of Obama’s many executive orders permits him to “commandeer” all domestic U.S. resources, including food and water supplies, energy productions, and transportation, even in times of peace, with no congressional oversight. On March 16, 2012, the National Defense Resources Preparedness EO expands on a law from the 1950s as the Cold War was heating up and there were fears of a conflict with the Soviet Union.


President Obama, obsessed with leaks to the press, has now turned the entire federal government into a workplace where employees are expected to report “suspicious activity” of their co-workers. Failure to do so could result in penalties including criminal charges. Though figures differ, by 2010 there were an estimated 2.5 million full-time federal employees.


According to an article by Jonathan S. Landay and Marisa Taylor, two reporters for McClatchy newspapers, the October 2011 executive order mandating the program is “based on behavioral profiling techniques that are not scientifically proven to work, according to experts and government documents.” The program, deemed flawed, “could result in illegal ethnic and racial profiling and privacy violations.”


As Americans have been learning in airports across the nation, the Transportation Security Authority routinely engages in profiling and highly intrusive physical “pat downs” that many find humiliating.


In 2011, the TSA’s “VIPR teams” conducted an estimated 8,000 unannounced security screenings at subway stations, bus terminals, seaports, and highway rest stops in which Americans were required to show some proof of identity. This is the same administration that opposes voter ID, but not when the police functions of the TSA are concerned.


In bits and pieces, news of activities at the Department of Homeland Security (DHS) has been reported and, when the dots are connected, some very scary conclusions can be reached. Why has DHS purchased 1.6 billion bullets as of March of this year? That is reportedly twenty times more than the amount of bullets expended in the Iraq War. Why is the DHS reportedly sending thousands of heavily armored vehicles and combat gear to cities and towns around the nation for use by police forces that are increasingly being militarized?


One can find a list of actions by the Obama administration that, together, portray preparations for the implementation of a police state as Americans are detained, as per a DHS report, because they are deemed to be potential terrorists because they hold beliefs and ideologies that include:


# “being fiercely nationalistic (as opposed to international in orientation)”


And those are just some of the “suspicious” activities or beliefs that can get you hauled off to a detention camp without the benefit of a trial.


While there have been a handful of incidents where terrorist acts have been perpetrated by those inspired by Islam, they do not justify preparations that clearly suggest the Obama administration anticipates a perceived national uprising against the federal government. Indeed, a number of marches in Washington, D.C. are planned, including one on September 9.


The legislation that has been passed and the executive orders put in place suggest that there are plans in place to ensure that the implementation of a police state can be swiftly imposed on Americans, contrary to all the protections of the Constitution. Indeed, given their existence, are we not already living in a police state?
© Alan Caruba, 2013
**************************
Alan Caruba's commentaries are posted daily at "Warning Signs" and shared on dozens of news and opinion websites. His blog recently passed more than 2.7 million page views. If you love to read, visit his monthly report on new books at Bookviews. For information on his professional skills, Caruba Editorial Services is the place to go! You can find Alan Caruba on both Facebook and Twitter as well.
*********************
VISIT J. D. Longstreet's "INSIGHT on Freedom" Face Book Page!!:   (Just click on the link for more conservative commentary by J. D. Longstreet and other popular conservative writers!)
Hypersmash.com
Ping Blog
href="http://pingates.com">Pingates