Death of General Robert E. Lee, 12 October 1870
“His moral qualities rose to the height of his genius. Hitherto men have been 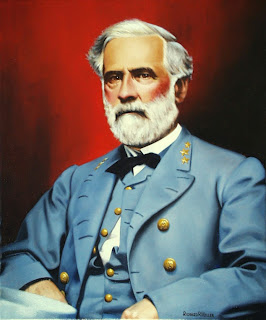 honoured when successful, but here is one who amid disaster went down to his grave, and those who were his companions in misfortune have assembled to do reverence to his memory. It is an honor to you who give as well as to him who receives, for, about the vulgar test, you show yourselves competent to judge between him who enjoys, and him who deserves, success…He sleeps with the thousands who fought under the same flag; he sleeps in the soil to him and to them the most dear. That flag was furled when there was no one to bear it; and we, a remnant of the living, are here to do homage to his peerless greatness, and there is an army of skeleton sentinels to keep watch over his grave.”  Eulogy by Jefferson Davis

The headline from a Richmond newspaper read, quote:

“News of the death of Robert E. Lee, beloved chieftain of the Southern army, whose strategy mainly was responsible for the surprising fight staged by the Confederacy, brought a two-day halt to Richmond's business activities.”

The United States flag, which Robert E. Lee had defended as a soldier, flew at half mast in Lexington, Virginia and throughout the USA.

General Lee died at his home at Lexington, Virginia at 9:30 AM on Wednesday, October 12, 1870. His last great deed came after the War Between the States when he accepted the presidency of Washington College, now Washington and Lee University. He saved the financially-troubled college and helped many young folks further their education.

Some write that Robert E. Lee suffered a cerebral hemorrhage on September 28, 1870, but was thought to greatly improve until October 12th, when he took a turn for the worse. His condition seemed more hopeless when his doctor told him, "General you must make haste and get well---Traveler---has been standing too long in his stable and needs exercise."

“I suppose of course that you have all read full accounts of Gen Lee's death in the papers. He died on the morning of the 12th at about half past nine. All business was suspended at once all over the country and town, and all duties, military and academic suspended at the Institute, and all the black crape and all similar black material in Lexington, was used up at once, and they had to send on to Lynchburg for more. Every cadet had black crape issued to him, and an order was published at once requiring us to wear it as a badge of mourning for six months.”

The rains and flooding were the worse of Virginia's history on the day General Lee died. On Wednesday, October 12, 1870, in the presence of his family, Lee quietly passed away.

The church bells rang as the sad news passed through Washington College, Virginia Military Institute, the town of Lexington and the nation. Cadets from VMI College carried the remains of the old soldier to Lee Chapel where he laid in state.

Memorial meetings were held throughout the South and as far North as New York. At Washington College in Lexington eulogies were delivered by: Reverend Pemberton, Reverend W.S. White---Stonewall Jackson's pastor, and Reverend J. William Jones. Former Confederate President Jefferson Davis [eulogized Lee] in Richmond, Virginia. Lee was also eulogized in Great Britain.  When all settled down, Mrs. Robert E. Lee said, "If he had succeeded in gaining by the sword all the South expected and hoped for, he could not have been more honored and lamented."

Many thousands witnessed Lee's funeral procession marching through the town of Lexington, Virginia, with muffled drums and the artillery firing as the hearse was driven to the school's chapel where he was buried.  US President Dwight D. Eisenhower knew and appreciated our nation’s rich history. He was criticized for displaying a portrait of Robert E. Lee in his office. This was part of his response; quote:

"Robert E. Lee was, in my estimation, one of the supremely gifted men produced by this nation."

Robert E. Lee was the hero of the Southern people and admired both North and South of the Mason-Dixon Line. This Christian- gentleman's last words were, "Strike the Tent."
Posted by Longstreet at 10/12/2013 01:23:00 AM