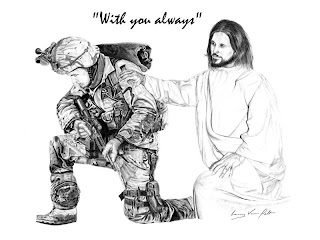 OBAMA BETRAYS THE US MILITARY!!!

*********************
The leader of the nation’s largest veterans organization says he is “deeply disappointed and concerned” after a meeting with President Obama today to discuss a proposal to force private insurance companies to pay for the treatment of military veterans who have suffered service-connected disabilities and injuries. The Obama administration recently revealed a plan to require private insurance carriers to reimburse the Department of Veterans Affairs (VA) in such cases.“It became apparent during our discussion today that the President intends to move forward with this unreasonable plan,” said Commander David K. Rehbein of The American Legion. “He says he is looking to generate $540-million by this method, but refused to hear arguments about the moral and government-avowed obligations that would be compromised by it.”The Commander, clearly angered as he emerged from the session said, “This reimbursement plan would be inconsistent with the mandate ‘… to care for him who shall have borne the battle…’ given that the United States government sent members of the armed forces into harm’s way, and not private insurance companies. I say again that The American Legion does not and will not support any plan that seeks to bill a veteran for treatment of a service connected disability at the very agency that was created to treat the unique need of America’s veterans!”


Commander Rehbein was among a group of senior officials from veterans service organizations joining the President, White House Chief of Staff Rahm Emmanuel, Secretary of Veterans Affairs Eric Shinseki and Steven Kosiak, the overseer of defense spending at the Office of Management and Budget (OMB).


The group’s early afternoon conversation at The White House was precipitated by a letter of protest presented to the President earlier this month. The letter, co-signed by Commander Rehbein and the heads of ten colleague organizations, read, in part, “ There is simply no logical explanation for billing a veteran’s personal insurance for care that the VA has a responsibility to provide. While we understand the fiscal difficulties this country faces right now, placing the burden of those fiscal problems on the men and women who have already sacrificed a great deal for this country is unconscionable.” Commander Rehbein reiterated points made last week in testimony to both House and Senate Veterans’ Affairs Committees.


It was stated then that The American Legion believes that the reimbursement plan would be inconsistent with the mandate that VA treat service-connected injuries and disabilities given that the United States government sends members of the armed forces into harm’s way, and not private insurance companies. The proposed requirement for these companies to reimburse the VA would not only be unfair, says the Legion, but would have an adverse impact on service-connected disabled veterans and their families.


The Legion argues that, depending on the severity of the medical conditions involved, maximum insurance coverage limits could be reached through treatment of the veteran’s condition alone. That would leave the rest of the family without health care benefits. The Legion also points out that many health insurance companies require deductibles to be paid before any benefits are covered. Additionally, the Legion is concerned that private insurance premiums would be elevated to cover service-connected disabled veterans and their families, especially if the veterans are self-employed or employed in small businesses unable to negotiate more favorable across-the-board insurance policy pricing. The American Legion also believes that some employers, especially small businesses, would be reluctant to hire veterans with service-connected disabilities due to the negative impact their employment might have on obtaining and financing company health care benefits.


“I got the distinct impression that the only hope of this plan not being enacted,” said Commander Rehbein, “is for an alternative plan to be developed that would generate the desired $540-million in revenue. The American Legion has long advocated for Medicare reimbursement to VA for the treatment of veterans. This, we believe, would more easily meet the President’s financial goal. We will present that idea in an anticipated conference call with White House Chief of Staff Rahm Emmanuel in the near future.

“I only hope the administration will really listen to us then. This matter has far more serious ramifications than the President is imagining,” concluded the Commander.

There have been times in the history of this planet when a government has turned on its military and sacrificed them for political gain because it was the expedient thing to do… not for the military, but for the government. We are experiencing such a time today as, in our opinion, the Obama Admnistration betrays the US Military. 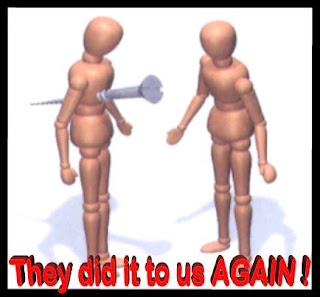 Every American citizen should be up in arms today... and out in the streets of the nation’s capital... demanding that "those people" in the White House and the Congress cease and desist, forthwith, this betrayal of the US military. For that, dear reader, is what this is. Plain and simple… the US government is betraying the US military if they go through with this plan.

They promised those kids they would be taken care of and those kids took them at their word, went out and shed their blood, making good on their part of the contract, and now Obama’s administration is stabbing them in the back! They are treating America’s sons and daughters as cannon fodder, as desposable, as something you'd scrape off the bottom of your shoe after traversing a cattle lot! They are treating the sons and daughters of America as though they are totally worthless.

We conservatives tried to warn you folks, who voted for that pea-brained crowd we now have running the country, that THIS is the kind of politicians they are. But you would not listen. You wanted change. Well, damn it, you got it. NOW… HOW DO YOU LIKE IT???

I apologize, dear reader, I am just too angry to continue this piece. I am shamed, I am disgusted, beyond words, by this reprehensible decision by the man who holds the title of Commander-in-Chief.

It would behoove Washington to remember that armies follow commanders they respect.

Conservative+US+Military+Obama+Insurance+Obama+Betrayal
Posted by Longstreet at 3/18/2009 06:37:00 AM

Before I get misunderstood I do agree that we need to fully fund the V.A. I am as upset about this as I was over Walter Reed conditions....

Obama scrapped this plan..... Unlike Bush he listens to the people he works for... Knuckle head Bush never would have changed course on a bad idea... After public outrage he still wanted to privatize social security...