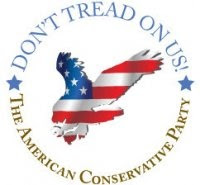 We have got to organize, we have got to bring ALL the splinter groups into this thing and get everyone pulling in the RIGHT direction.

No more RINO politics, no more libber politics, no more being forced to settle for the lesser of the evils! Conservatives of all persuasions are FED UP and it's time we stood as one, and told BOTH major parties, this is it, we are here, we are angry and we are coming after you!!

Big Tent politics is NOT going to get the job done. Big tents are great for the circus, if you want to go to a circus to be entertained. I don't want my government to be my entertainment! The circus in D.C. appears to have the CLOWNS running the show.

And so you know, I am NOT anti-GOP, I am anti-RINO, and any Republican that isn't anti-RINO is NOT a Conservative.

There are some folks that a declared Democrats and are, in their hearts, Conservatives and true patriots, they too are looking for a place that they won't be taken for granted.

As a whole, the major parties of this nation have NO USE for you and me! It's this simple, we only matter when the politicians are looking for votes at election time.

Conservatives normally vote for the Republican party, but as of late, except in a few isolated incidences, we don't have any REAL, Conservative Republicans to vote for, all the GOP/RNC has offered up is Dem-Lite, more RINOs.

If your party isn't doing the things you think it should, if you are tired of the *Good Ol' Boys* network, if you're tired of your choices being Dem and Dem-Lite, the lesser of the evils, maybe you're a prime candidate for membership in The American Conservative Party yourself.

All we're asking you to do is take an open-minded look, read the platform, see for yourself. You may find yourself mildly surprised!

And here is the biggest PLUS I have found to date, any time I have had a question for the leadership of the ACP, I have been given an ANSWER, not a BS, *go away kid, ya bug me*, I mean a REAL answer. So far, those answers have taken care of any and all questions I have had.