Socialized Medicine in the US. 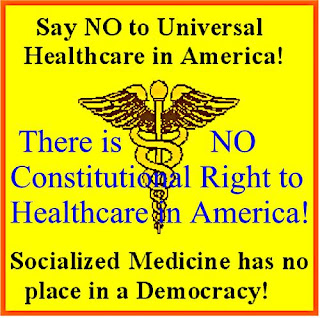 Now, lets get something straight… I believe the Health Insurance Companies, in America, deserve what they get. They have been, in my opinion, abusing their subscribers for entirely too long. Rates have risen through the roof at an undeservedly fast pace. Sure medical costs have gone up, but not at the percentages your insurance premiums have gone up. This has to stop. But National Health Care is a cure worse than the disease.

More government in our lives is more than just a little bit scary. Once National Healthcare is implemented, and don’t get me wrong, I believe some form will be, your life will be under the control of the administrators of that insurance.

For Instance, lets say you have an obesity problem. You have developed a heart problem as a result of the obesity. You need treatment for your heart. National Health Care says: “OK, we will not pay for the heart treatment until you lose weight”. Or, they provide all citizens with a chart, approved by the FDA, of the “Approved Foods” all citizens should eat. They make it clear that if you cannot show proof of having ingested those “approved” foods, on a regular basis, also decided by them, you Health Insurance is no good. You will not receive treatment. Or, another example, you may be allowed to have one child only. It must be a boy. (See China.) If you choose to have another baby, after the approved ONE, the costs will come out of your pocket. Get the picture?

Now, this does not take into account the reduced quality of care we will receive from the medical community. Their hearts will not be it. After 8 years. or so, in school, to learn their profession and they will become “salaried government employees”. Need I say more?

The left is hell-bent on imposing such a system on the citizens of this country. National Health Care is a Socialist dream. It is also a Conservative’s worst nightmare.

We must be on our guard, for some form of National Health Care is about to raise its ugly head in the Nation’s legislature. Our socialist Congress, in ka-hoots with our socialist president, are working hand in hand in the shadows, behind the scenes in Washington, DC, to yoke the citizens of this country to the slavery of universal healthcare. The month of July is the target date, we are told, to get a bill to the floor of the US House of Representatives. It is time for conservatives to exercise their power and stop it in its tracks as we did the “Clinton Care” attempt in the ‘90s.

Email ThisBlogThis!Share to TwitterShare to FacebookShare to Pinterest
Labels: Socialized Medicine in the US