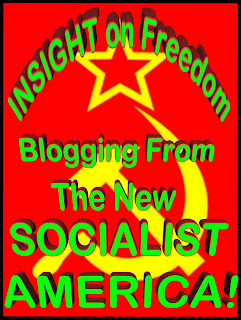 Any person lucky enough to be elected President of the United States during this current generation of Americans IS lucky, indeed! Why?

Because this current crop of Americans must be, no, has to be, the dumbest bunch of Americans ever to pollute the face of the earth! The current president can lead, (and has been leading) Americans around as if the American electorate was a bull with a ring in it’s nose.

The Obama administration with the assistance of a sycophant Congress has cleaned the treasury out for this generation of American and the next and, yes, even the next.

Less than intelligent Americans have been hit with one crisis after another, real or imagined, and then gushed their gratitude to Obama when he “fixes” the crises he, or his administration, created. For instance - I am STILL not satisfied that the financial crisis did not happen, right on cue, in September of 2008. We said then it was the “October Surprise” one month early. I still feel that was a correct assessment today. I have not seen, heard, nor read, anything that has had the capability to change my mind on that. A government using one crisis after another to implement more and more government programs, and laws, to gain more and more control over the people is one of the oldest political strategies in the book. Add to the mixture an American populace as naive, as the current generation of Americans, and you have a political plum ready to be plucked and the democrats/socialists, including the Obama Administration, have plucked that plum with élan and flair! I remain convinced we are seeing is a beneficent dictatorship aborning.

Example, we told you early on that if nothing were done the current recession would be over around Christmas of this year. Well, reluctant government agencies now tell us, the recession is already showing signs of ending. Guess who’ll get the thanks and praise for ending a recession that had a limited run right from the first day it began. It would be laughable if it w ere not so serious.

So much we conservatives warned America about, has already happened and the poorly educated among us have swallowed the threats and dire warnings coming from our socialist government as they use the cover of impending disaster to move their control of the power of government of it’s citizens ever tighter and, in so doing, making it even more difficult to rescue what will be left of a free America from their clutches.

We predicted many months ago that the 2008 election was the last free election in America. We have been scoffed at for having the stones to say what many others know, too, but, desire the praise of men, rather than speaking the truth - no matter how difficult it is, no matter how unpalatable it is.
While I am on this subject let me tell you how I see the 2010 election shaking out. It will be another democrat rout of republicans. And it will continue to be democrats winning in landslides until the republican party sucks up enough courage to break away from the control of the socialist in their midst and the so-called “moderate republicans” who are, frankly only democrats in republican clothing.

So who or what rattled my cage today and brought on this fit pique? Something called the “Denying Firearms and Explosives to Dangerous Terrorists Act of 2009”. So, what’s wrong with it? Have you looked at the definition of “dangerous terrorists” in America today? If you haven’t and you finally decide to check out who the Obama government is going to go after, you will see, and quickly, that most real conservatives in America are on either one list or multiple lists!

According to World Net Daily: “A new gun law being considered in Congress, if aligned with Department of Homeland Security memos labeling everyday Americans as potential "threats," could potentially deny firearms to pro-lifers, gun-rights advocates, tax protesters, animal rights activists, and a host of others – any already on the expansive DHS watch list for potential "extremism." World Net Daily goes on to explain: “The bill requires only that the potential firearm transferee is "appropriately suspected" of preparing for a terrorist act and that the attorney general "has a reasonable belief" that the gun might be used in connection with terrorism.”

Care to venture a guess as to who introduced this bill? Well, according the article it was none other than Rep. Peter King, R-N.Y. (Please note the “R” behind Mr. King’s name.) Already some of us “Gun Nuts” (By “Gun Nuts” I mean Americans who still believe the US Constitution - in particular the Second Amendment - means what it says.) are screaming bloody murder that this bill allows the federal government to just suspend an American citizens rights, without a trial , or even so much as “proof”, that the person being denied those rights is, in fact, a terrorist. To deny you your constitutional rights to own a firearm in America, all the government needs to do is SUSPECT you may be “dangerous.” You can read the article for yourself HERE.

You need to take a look at this bill making it’s way through the Congress. It is HR 2159. It is referred to as: “A bill to increase public safety by permitting the Attorney General to deny the transfer of a firearm or the issuance of firearms or explosives licenses to a known or suspected dangerous terrorist.” You’ll find it HERE.

I’d like to believe that Americans would rise up in righteous fury over this bill and let their congressperson and Senator know how they feel about it and be darned sure their representatives to the Congress understand that if they support this bill they will not receive the support of the American electorate at the next election. But, honestly, I don’t see that happening. Not any more. It is far easier to sit back and allow the government to take care of us - right? Sure we can. Sure we can.